Last month, during my short stay in the northern Scotland, not only did I venture to the Far North but to the Western Coast, using the West Highland Line to travel between Fort William to the line's terminus at the Scottish fishing port of Mallaig. 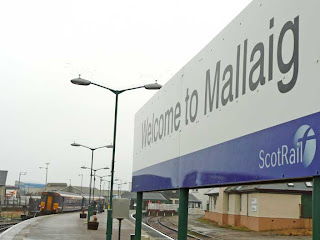 The day had not got off to a particularly spectacular start, when a generic un-branded, Stagecoach-liveried Volvo B10M/Jonckheere pulled up to the stance in Inverness bus station, working Scottish Citylink Service 919 to Fort William. With no toilet, air conditioning or reclining seats, the premium fare paid (as opposed to the fares Stagecoach would normally charge on routes where this vehicle would normally be deployed) left a bitter after-taste in my mouth.

And of course in Fort William, upon our arrival, it was raining. I've been to Fort Bill on three occasions, and on each the heavens have opened and I've found myself dodging rain drops to take photos. That said, the sky was looking fairly bright in the distance and the mist was starting to lift a little. I was hoping for a reasonably good day, weather-wise, as I'd read an online report by the BBC claiming that the line on which I was about to travel could be described as one of the 'Top 10 Railway Journeys in the World". M'colleague, who's travelled on the line numerous times, said that the BBC's labelling of the route was a little far-fetched, but that the journey was very impressive indeed.

The highlight of the trip is the stunning Glenfinnan Viaduct, a 100ft-high stricture, built between 1897-1901, which tightly curves as it passes over the head of Loch Shiel and the monument to Bonnie Prince Charlie, who landed here. The viaduct was used in the second Harry Potter movie (the Chamber of Secrets) and is the first of its kind to be build using purely concrete, featuring 21 arches and built by Sir Robert McAlpine. 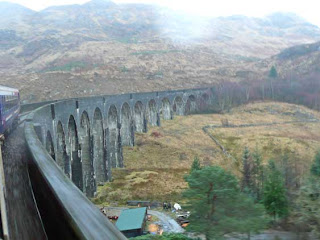 A second shot of the Glenfinnan Viaduct. Both shots turned out well considering the 'light monsoon' conditions
The route sees Class 156 operation by First ScotRail, though in the summer a daily steam-hauled service operated between Fort William and Mallaig called 'The Jacobite'. Operated by the West Coast Railway Company, 'The Jacobite' is the only scheduled steam-operated service on the National Rail network. The fare was very cheap indeed, costing a mere £11.60 return. 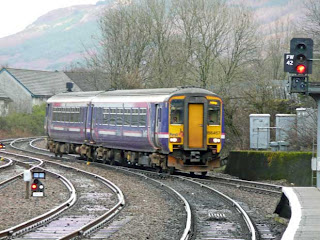 156457 was our train in both directions. First ScotRail use Class 156s on the West Highland Line
I've seen reports claiming that Mallaig is a "bustling fishing port"; it most certainly was not when we visited. As the train came to a halt, the thirty-or-so passengers alighted and seemingly disappeared into the scenery. The train crew secured the unit and they disappeared, too. Within 5 minutes of the train coming to a halt, there was complete silence everywhere. No pubs were open, the local Co-operative was deserted, there was no one working in the harbour. It was quite an eerie feeling!

So quiet was our stay in Mallaig, that the most newsworthy event was when I went to withdraw some cash from the hole-in-the-wall only to find that the ten-pound notes depicted the Glenfinnan Viaduct on them. 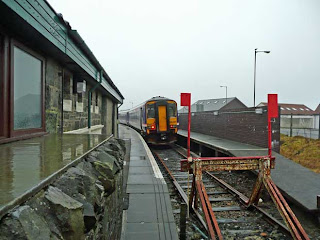 Mallaig is very much the end of the line, well, on a cold, wet February day!
As we had a little over two hours before our train left to return us the the relative metropolis of Fort William, we made the decision to have a wander around the harbour. The rain was steadily becoming heavier, making the use of my camera a little tricky to say the least. From the vantage point to the north, where we climbed, you can - on a good day, apparently - see the nearest islands to the mainland, Eigg & Rum. 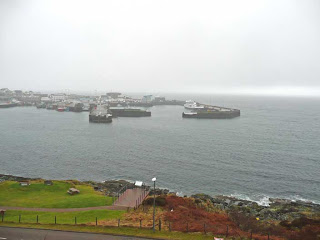 On a clear day, where the sea meets the mirk, you can see the small islands of Eigg and Muck from here
A curiously-named station along the route is Lock Eil Outward Bound. It's quite a new station, too, opening in 1985. I later learned that it was named after the nearby Outward Bound (outdoor educational) centre that it was built to serve. Trains stop here in both directions, not only the one, as its name could lead you to believe.

On a good day then undoubtedly the line could prove far more picturesque than it did when we visited. It's certainly one of, if not the best line in the British Isles for spectacular scenery - something pretty evident even on a wet, dark day in February. On a personal note, this was the last stretch of line in the Highlands that I needed to cover before ticking the 'done' box. In many ways it formed the highlight of my rail travels in this part of the country. (GL)