The Isles of Scilly council has successfully been awarded a government grant of £51,000 to fund free local bus travel for the over-60s. Understandably, residents thereon have greeted the news very well indeed.

Unfortunately, the five islands that comprise Scilly do not entertain any bus services whatsoever. They do have a population, 66% of which are over 60 years of age and are entitled to the same free local bus travel as their mainland Britain counterparts.

What has happened? The legitimate and sound Whitehall grant was allocated fair and square thanks to the 'arcane formula' the Department for Transport (DfT) use to determine how much extra subsidy each local authority receives to cover the cost of funding the free concessionary bus pass scheme throughout England. While some authorities find they have insufficient funding for the scheme that was forced on them by the then Chancellor Brown as an afterthought in his 2005 Budget, there are some - Scilly being an example - who receive more than they require to reimburse bus operators - 100% more than they need in Scilly's case.

The LibDems undertook a survey covering all local authorities in England and found that, on average, most were underfunded to the tune of £600,000. We reported last month how Peterborough City Council is in the red to the tune of a cool million. While Scilly's £51k is a drop in the ocean to many authorities, its allocated purpose simply does not exist there.

The Isles of Scilly qualifies for the annual grant because 640 of its 2,100 inhabitants are aged over 60 and that it receives thousands of visitors each year (tourism accounts for 85% of the islands' income) and of these tourists, those from England are able to use their concessionary bus passes on the non-existent island services.

The Times requested details of how much bus pass grant the island has received to-date. The island council's press officer (who doubles-up as tourism officer) said that she was "too busy" and said that the paper's reporter should file a Freedom of Information Act request, which the council would respond to within 21 days. 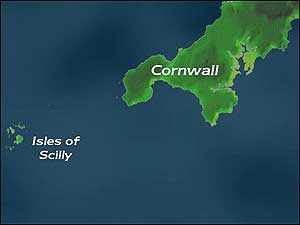 A spokesman at the DfT confirmed that Scilly received the most recent grant of £51k, adding “We don't have a bespoke formula for each authority. That's why there is no special arrangement for Scilly. There is discretion in how the money is used.”

We understand that Scilly is considering putting the grant towards a free taxi service for the over-60s and is currently putting the money towards affording its residents free boat rides between the islands. (GL). Isles of Scilly map (c) BBC