Appearing on Stagecoach's website was a report of its acquisition of Preston Bus. The two companies have been in competition since the autumn of 2007, with North West Traffic Commissioner Beverley Bell having to intervene to ensure a fair battle, as it were.

Two Stagecoach drivers had their licenses suspended following underhanded tactics and a call from the Traffic Commissioner for both operators to sign a voluntary code of conduct was heeded and adhered to by both operators. The alternative was a full Public Inquiry. 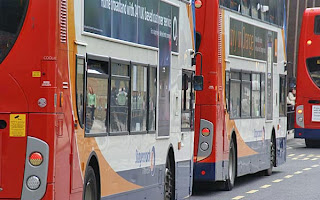 Back in June last year, Preston Bus was 20th in our list of 35 largest-remaining independent bus operators. Not only is the acquisition a "nice fit" for Stagecoach, it also removes the competition it had in the city for the past 18 months or so and also provides a very large, predominantly urban operation added to the fold.

We reported the meeting, planned for last Wednesday, at which Preston Bus employees discussed the possibility of selling their business, of which around 40% have a 53% stake in the company.

Stagecoach has pledged to make no redundancies to driving and engineering staff for the next two years, though has signalled that administrators may not be so lucky. Passengers have already started to benefit with inter-availability of tickets from last Sunday, and from next month fares and ticket-availability will be simplified.

Preston Bus' MD Peter Bell claimed the main reason to sell to Stagecoach was the future of uncertainty. Would he have been looking for a buyer this week had Stagecoach not 'come to town' with competing services and cheaper fares in the autumn of 2007??? If the 21st largest independent operator in the UK is willing to sell as a result of uncertainty, then what about the hundreds of smaller operators beneath it?

In the end perhaps the sale took place as a result of Preston Bus' long-term employees wanting to cash their shares in - they value of which had been calculated at £30k for some drivers - which could certainly be put to good use in the current financial climate. And who could blame them? A spare 30k would come in handy for everyone. The sale almost certainly bodes less well for newer Preston Bus employees, who are likely to see a worsening of conditions after the 2 year 'honeymoon period'. (GL)