During last summer some newspapers carried columns devoted to adverts being prepared to be placed on the sides of buses that claimed "There’s probably no God. Now stop worrying and enjoy your life". 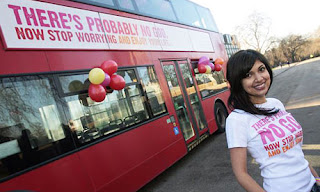 Initially the adverts appeared on buses in London, though in the last few weeks the scheme has moved nationwide and has attracted further attention. A relative of mine, born and bred in Hungary, recently contacted me to say that he would love a photo of an "agnostic advert" on the sides of one of the buses he's heard all about. The difference is that in Hungary they're being reported as agnostic adverts, i.e. not atheist.

To date I've not seen one of these atheist/agnostic adverts, except by Googling them (not sure if m'colleague has?), but with 800 buses nation-wide carrying the advert, they are most certainly out there. They can also be seen on the London Underground.

At the end of last week, a driver in Southampton, working for First, made national headlines when he - of Christian faith - refused to drive a vehicle based at First's depot there that had an atheist advert on the side. Wanting to nip any possible claim of prejudice on the grounds of religion (and the bad publicity this could bring - remember the Stagecoach bus boycott when its chief exec Brian Souter showed his support for Section 28?) in-the-bud, First Southampton has "agreed to do everything it can to accommodate his refusal to drive the vehicles".

First will also be more than aware that the public has no idea that it has nothing to do with the adverts that appear on the sides of its vehicles, being provided and applied by companies such as Viacom. Revenue from this type of advertising on buses provides a fair sum of money for operators. The solution could be for operators to welcoming advertising on their buses but specifying they would not allow advert-carrying statements that could annoy religions.

It could be that First's sympathetic view towards the situation could be the minority view. Initially I suspected that the nation would be behind Ron Heather, the driver - we still live in a country whose main religion is Christianity, after all - but having trawled through the web looking for other papers' online 'take' of the story seems to suggest little sympathy. 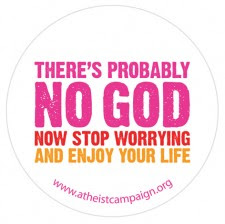 The courts ruled a year ago on the case of a 55-year old check-in desk worker at Heathrow Airport. They said that she had no grounds to refuse to return to work after British Airways, her employer, told her to remove her necklace as it contravened their uniform policy. Nadia Eweida claimed that her Sikh and Muslim co-workers were entitled to wear religious garments. Back in 2006 when the argument first aired, then prime minister Tony Blair urged the airline "just to do the sensible thing", i.e. back down. BA didn't and ultimately won, though has since reviewed its uniform policy. The tribunal ruled in favour of BA on the grounds that being a Christian does not rely on wearing jewellery, whereas being a Sikh man does necessitate the wearing of a turban. The view was also taken that wearing jewellery as a check-in desk employee could cause injury when handling luggage.

The Southampton bus driver's case is further marred by the chief executive of the British Humanist Association (BHA), Hanne Stinson, who said, "I don't think he should be allowed to refuse. There's no way that the advert on the side of a bus means the driver agrees with it. It's important that people have the right to express their belief." It is the BHA who is behind the so-called atheist adverts on buses.

The Atheist Bus Campaign has its own website (it closes on 14 April 2009), where "freethinkers and atheists" can donate money, and also has a shop that sells its own merchandise.

The bus adverts carefully (deliberately?) carry the word "probably" (There is "probably" no god...). The European press are reporting them as "agnostic adverts"; perhaps they get the real message being portrayed?
Posted by LEYTR