A pilot of a US Airways Airbus A320 was forced to make a crash landing in the Hudson River, adjacent to Manhatten's 48th Street, after both engines failed following a collision with a flock of geese.

Miraculously, all 155 people aboard Flight 1549 survived to ordeal as a result of the skill and experience shown by the plane's pilot, Chesley Burnett Sullenberger III. In the day that followed the crash, it emerged that not only was the plane's captain a hero, but others from the crew offered their jackets to passengers suffering hypothermia after a lengthy period in near-freezing water. One passenger claimed that he was literally given the shirt off one of the stewards' back. 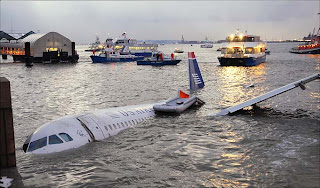 A total of 57 passengers were taken to local hospitals following injuries sustained in the crash landing, most of which were as a result of prolonged exposure to the elements; the worst reported injury was a woman who broke both her legs. It is also being reported that Captain Sullenberger III made two sweeps of the stricken Airbus after all passengers and crew had been taken to safety so ensure no one had been overlooked and that he was the last person out.

Quite rightly the 57-year old former US fighter pilot is being hailed a hero and I'd imagine that pilots everywhere have felt much pride as they went about their work today. The fact that a flock of geese could make both engines fail shows the futility of our modern aircraft, yet at the same time aviation experts claim the chances of this type of accident happening were "a million to one".

One of the reason there are thousands of people who simply will no set foot inside a plane is that they perceive this type of travel as unsafe, or certainly not as safe as more conventional means. Primarily, this perception is as a result of the survival rate should a plane make a crash landing - not very high. When a coach - quoted as the safest mode of public transport in Britain by National Express - is involved in an accident, 100% of those on board do not die. Most plane crashes see either a 100% mortality rate or a percentage very high indeed. It is, therefore, even more astounding that landing in such a populated area of the United States - and on water - saw a 100% survival rate. 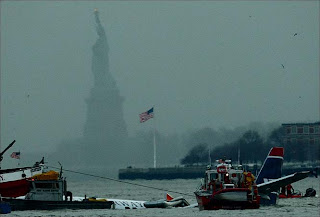 Not wanting to detract any glory from the captain, but a certain element of luck was evident during the crash landing - the location of which had been chosen by the captain after an initial attempt to land at a nearby airport was aborted. The domestic flight was relatively short, too, so the plane's fuel tanks were only half-full, which aided the plane's ability to float on the water.
Posted by LEYTR