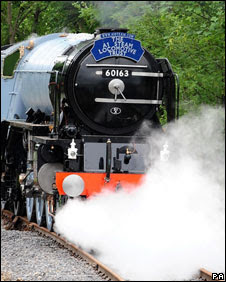 I heard this on one of the Radio 2 news bulletins today. A fascinating story indeed....
The first steam engine built to run on the UK mainline for almost 50 years has made a successful trial run. Tornado was funded and assembled by steam enthusiasts in Darlington in an 18-year project costing £3m.

The 72ft (22 metre) engine is based on the Peppercorn A1 locomotive, which British Railways withdrew from service in the 1960s. The loco made its first public move under its own steam on Friday morning in front of a crowd of onlookers. Once fully running and certified it will be used to haul charter trains operating on Network Rail.

The A1 Steam Locomotive Trust project has raised more than £2.9m through deeds of covenant, commercial sponsorship and loans, but a further £66,000 is needed to pay for tests and trials. Mark Allatt, chairman of the A1 Steam Locomotive Trust, said: "When this project was launched in 1990 many people said that it could not be done. The completion of the construction programme proves the doubters wrong. Tornado's first public move in steam marks the beginning of the final phase for a project that many said could never be completed.

"In 1990 a group was formed with a vision and the determination to make it succeed - to build and operate a Peppercorn class A1 Pacific steam locomotive for main line and preserved railway use. Eighteen years later, and thanks to that shared vision and determination, Tornado has turned her wheels in anger for the first time. It is thanks to our more than 2,000 regular monthly and other donors and the hard work of our volunteers and contractors that all that remains now between Tornado and main line operations is the successful completion of her test and trials programme."

Mr Allatt said it will not run on a specific route but will make occasional trips to towns all over the country.

Destinations are expected to include Scarborough, York, Bath, Bristol and Oxford.

Today's event was attended by Dorothy Mather, president of The A1 Steam Locomotive Trust and widow of the designer of the class A1s
Posted by LEYTR