Hot-on-the-heels of its acquisition of coach operator Rennies of Dunfermline, Stagecoach purchased Long Sutton-based Cavalier Travel on Tuesday (1 April). We were told unofficially as long ago as January that Stagecoach wanted to buy the firm, but were asked not to publish anything.

Although Lincolnshire-based, Cavalier Travel will be administered within the Stagecoach Cambridgeshire group since one of its subsidiaries, Huntingdon & District, operates bang in between its Peterborough and Cambridge operations, both form part of the Cambridgeshire group.

Originally owned by United Counties, the company currently operating as Huntingdon & District had been operated by Stagecoach until it acquired the Cambus/Viscount business in 1995 and opted to divest the Huntingdon operation to stop its recent acquisition being referred to the Monopolies & Mergers Commission. It also chose to divest in Milton Keynes at the same time. Huntingdon & District subsequently became part of the Blazefield Group, where it was referred to on paper at least as 'Hu&D' to avoid confusion with the group's Harrogate & District operation. 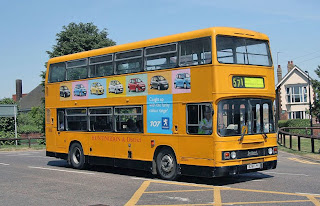 Two years ago Cavalier Travel purchased Huntingdon & District and has slowly adopted its livery to all vehicles in its ownership though retained the H&D name. The Stagecoach purchase will see a lessening of competition along the Peterborough-Whittlesey corridor as Cavalier were one of three bus operators competing for patronage, and likewise only two operators will have exclusive use of the St. Ives Guided Busway (Stagecoach and Go Whippet) as H&D were to be the third operator.

Stagecoach management will be a little cautious of altering the Cavalier business too much in case of a referral to the Competition Commission: after all the Stagecoach brand in the area has in fact increased since 1995, primarily down to the expansion in Cambridge. Stagecoach branding will appear on the rear of Cavalier/H&D vehicles over the next few weeks and H&D services (and presumably Cavalier Service 337 between Whittlesey-Peterborough) will fall within the MeagariderPlus area already available, offering significant savings on weekly travel. 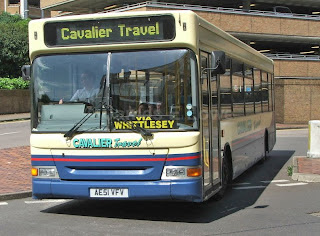 Cavalier directors, Chris Bloor and Dennis Upton are not moving to Stagecoach, but are retaining the private hire element of their firm, returning to their roots when Cavalier was set-up in 1977. They are expected to move to a new location in Long Sutton this week.

For as long as it's made available, the complete Cavalier Travel fleet list can be viewed by clicking here.
Posted by LEYTR