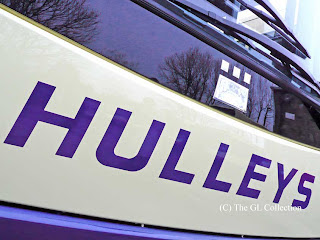 I attended an evening tour with Transpire, the Chesterfield Bus Society last night. Arrangements had been made with the manager of Hulleys and two of his drivers - all three of whom are Transpire members - for a visit to their Baslow depot to photograph their fleet plus a tour of the Peak District in one of their vehicles, with a 'refreshment' break at Bakewell.

Henry Hulley & Sons, trading as Hulleys of Baslow, can trace their roots back to 1914 when Henry Hulley purchased a 5-seater Ford T taxi, and expanded this one-man enterprise in 1920 when two more taxis were purchased, both Darracq cars; later in 1920, following the Road Traffic Act of that year, the name Hulleys was registered. 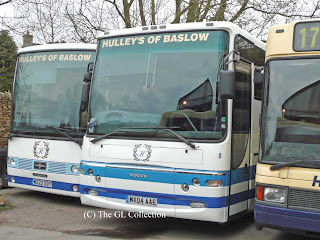 The following year saw the Hulleys business purchase their first bus - a one tonne T Ford with solid tyres and centred steering wheel. It operated on their first registered bus route between Bakewell-Baslow-Chesterfield, which still operates today as Service 170. In 1922 a purpose-built house and corrugated iron shed were built to house the small fleet of vehicles, and over subsequent years additional vehicles were purchased, which meant the small corrugated shed had to be replaced by the end of the 1920s. During the 1930s the firm started running coach tours; purchased land opposite their depot where they installed petrol pumps and sold this to the public; and in 1938 became a limited company. In 1939 the business of Maurice Kenyon was purchased. 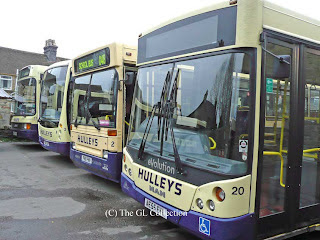 Today Hulleys operates a fleet of 19 vehicles, all but three are buses used on stage-carriage bus services based in and around the Peak District and Derbyshire Dales.

Photos from last night's evening tours can be seen by visiting my fotopic site where they've been uploaded.
Posted by LEYTR