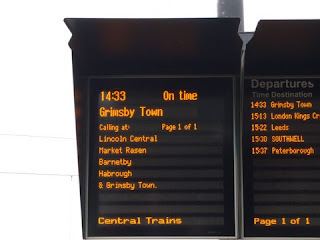 Starting last Monday (4 February), National Express East Coast, the company who took over the operation of the East Coast Main Line franchise from GNER on 9 December 2007, implemented a rather surprising policy which sees them potentially remove the departure listing for each of their services up to 10 minutes before departure at King's Cross.

The move has been taken, according to NXEC, to ensure punctual departures of its services from King's Cross. I think that arriving for your NXEC train service, say, 8 minutes before its departures is perfectly acceptable and that as passengers who could have paid in excess of £100 for our tickets shouldn't then spend the remaining time studying the departure boards at a loss as to where our train is - a move that could actually increase the number of people missing trains yet there in good time.

That said, on the occasion I was at King's Cross recently, all departures were shown until at least the last minute; it could be that NXEC plan to implement this new ruling at only specific times of the day.