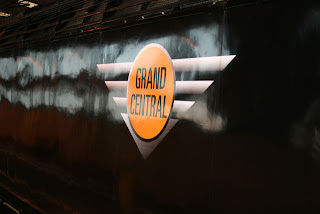 Today saw the start of a brand new rail operator, Grand Central, operating direct trains between Sunderland-London King's Cross. Grand Central is an open access operator, effectively meaning the company can operate services between any points on a route subject to it being physically possible. Hull Trains, who operate along some of the same route are also an open access operator - the UK's first, though soon after the term 'open access' was introduced, any company operating any UK rail franchise was allowed open access. East Midlands Trains, for example, have pledged to operate a direct Lincoln-London service, so too have National Express East Coast.

At 0646 this morning the first direct passenger train from Wearside to London departed, the first such departure for just under 20 years, and reached King's Cross at 1032.

Upon arrival in King's Cross the train will operate a return "short" trip to York, departing London at 1127 (arr York 1319) and returning from York at 1405 arriving in King's Cross at 1602. The final journey is from King's Cross at 1650, arriving in Sunderland at 2035. This is only a temporary timetable, with a full schedule coming into operation during 2008 when the company has received the remainder of its rolling stock. Click HERE to see the Grand Central timetable. 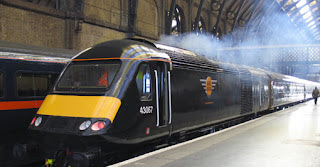 All Grand Central’s Sunderland to London services will call at Hartlepool, Eaglescliffe (for Teesside), Northallerton, Thirsk and York. After the Christmas/New Year holiday they will all feature a full restaurant service, open to both first and standard class passengers. Free WiFi connection throughout the train will be fitted in January. The new Grand Central services will open up new journey opportunities to the capital for passengers from Sunderland, Hartlepool, Teesside and York, and provide an opportunity for business and leisure travellers from south east England to make direct journeys to the Tees Valley and Wearside.

The launch of services today is a landmark achievement for Grand Central, which faced opposition from train operator GNER and the Strategic Rail Authority during its seven-year battle to become Britain's second open access rail operator. In the past 12 months it has been forced to repeatedly postpone the launch of services due to delays to the refurbishment of High Speed Train rolling stock.

I particularly like the Company's tag line as printed on their timetable page: "The train you've been waiting for." Haven't we just!