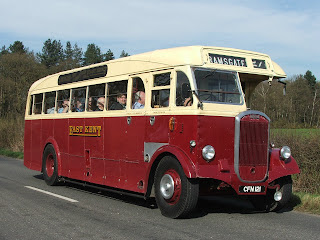 Went to a Bus Rally today in Lincoln. Based at the Lincolnshire Road Transport Museum in Whisby, the Lincolnshire Vintage Vehicle Society offer two running days a year - Easter Sunday and the first Sunday in November. Normally I managed to go to one rally a year depending on my Sundays off work, but this Easter Sunday rally seemed very under-patronised indeed. Apparently there was another event happening somewhere in the country hence the low turn out. Parking is limited at the Museum so arrangements are made to park at the Moorland Centre on Tritton Road in the city and a free shuttle bus service to/from the Museum operates every 15 minutes throughout the day using vintage buses. 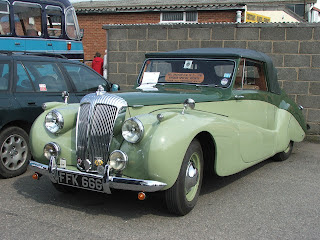 The LEYTR Treasurer Richard Belton, my co-editor Peter and member Richard Woodhead were all present and I hoped to meet a guy I'd been communicating with for 3 years, called Paul Macnamara. He's now one of the Commercial Managers for Stagecoach East Midlands. Rich pointed him out to me eventually and we had a chat about things. It was nice putting a face to the name.

As it's a Road Transport Museum there are vintage cars and vans there so it made a nice change to photograph them too. Quite a few visiting vehicles were present too - they'd brought people from away to visit and were parked up in an adjoining area. I met a guy who drives for Stagecoach called Steve, and was quite chatty and approachable. He brought a brand new bus that hadn't entered service yet - it forms a fleet of 7 new vehicles for route 1 (Lincoln - Grantham) that enter service on Friday 13th no less!! I had a look around it while it was parked up and it seemed nice and spacious inside, though the comfort of the seats over the rear axle and beyond was poor.

The dashboard looked not dissimilar to that of a 1973 Daimler Fleetline I've driven in that it was suspended from the front window ledge. 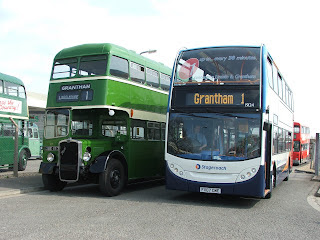 Best part of the day was the additions I made to my tie collection - 21 ties in total! Yes, the biggest ever recent haul I've made. Some amazingly rare examples of local operators I'd never, ever seen before. I went to hand over £38 for the first 19 only to find I had a grand total of £30 in my wallet so luckily Peter subbed me £20. I'll blog the additions in another post. Quite amazed I really was. The collection belonged to a guy called Sam who is the main painter of buses belonging to Stagecoach, and who was selling his tie collection in order to raise funds to help him restore a bus he'd recently bought that was new to Lincoln City Transport.

Later on, just before I was ready to catch the last bus away from the Museum, I noticed yet another one of his collection I'd not got so snapped that up - £40 in total! Rich gave me a tie for trent barton his mate had given him so this made my 21 tie acquisition. Humorously I got one of the very rare ties out of my bag and showed it to LEYTR Chairman Paul Hill, (also the former MD of RoadCar) and he didn't know it had ever existed! He was quite shocked to see such a garment and said he would be having words with his former Engineering Director about it! 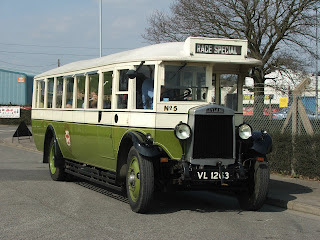 The final plan was for us all to catch the last tour (5pm from the Museum) into the city and back to the Museum, where Steve would kindly drop Pete and I off at the Moorland Centre on the new Stagecoach Enviro bus on his way back to the depot - our own personal demonstration! Paul accompanied us and at the Moorland Centre only my car and Paul's were parked there. Paul took some official publicity photos of the vehicle to send to the Grantham Journal for an article they're running to help launch the route on Friday; Peter and I took exactly the same photos and plan to upload them to the Transport Review's website before they're printed in the Grantham Journal.

I offered to give Peter a lift to where he lives - Skegness - and after calling at the Turnor Arms in Wragby for a quick pint, we stopped at a place called The Fleece in Burgh le Marsh for some food. Surn 'n' Turf we both had - £8.95 each but steak and scampi are never the cheapest things on the menu. A really nice meal. I drove Peter home and then made the long journey home myself. (GL)