A Sea of Nothing, A Second Lease of Life, A Short Hop & A Strike-Free Saturday 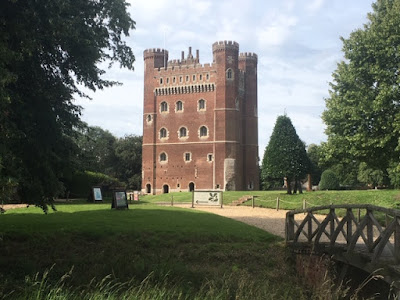 Sunday - A Sea of Nothing

August is upon us and I spent this weekend visiting my parents who are staying in a touring caravan near Martin, Lincolnshire. Today we took my children to visit Tattershall Castle. Naturally the option of public transport was discounted with it being a Sunday, so we drove the 5 miles by car. The National Trust is custodian of this fortified medieval stately home, saved from demolition in 1914 (its fireplaces had been ripped out and were ready to set sail to the USA before intervention saw them reacquired and refitted), and its entrance fee was a little steep (if you'll pardon the pun) considering you can't get to the very top "for the foreseeable future" due to rotting wood. Two entry fees were quoted - one devoid of Gift Aid (cheaper) and the other with it included (dearer). When I've previously donated to charities my request for the donation to be considered for Gift Aid has seen additional financial benefit to the organisation at no cost to myself, since tax is then waived. It appears this is no longer the case.
Having enjoyed the overall experience, aided by the glorious weather and the plethora of informative detail scattered at every level of this iconic structure, we headed into Tattershall village centre for an ice cream. Here a lone, wooden bus shelter can be found, whose main use is for passengers awaiting Brylaine Travel's InterConnect 5 bound in either direction (Lincoln/Boston). It was a picturesque location, so much so that a couple chose to sit inside the shelter while they devoured their lunch. I smirked a little, imagining how I'd break it to them if they were expecting a bus to turn up anytime soon. This got me thinking about Sunday local bus provision in this part of Lincolnshire. No CallConnect. No Brylaine Travel. No Sleafordian Coaches. No Centrebus. No Delaine Buses (north of Bourne). Tattershall receives just one 'bus' a day on Sundays in the form of National Express Service 448 (Hull-Grimsby-London), which is registered as a local stopping service so fuel duty rebate can be claimed, though a now closed loophole means concessionary bus passes are no longer accepted for free travel.
The couple waiting here would have had a shock if they did require the 448 as it doesn't stop here, but at opposing bus stops on the main road. In fact the nearest bus would be Stagecoach's InterConnect 56 (Skegness-Horncastle-Lincoln).

Thursday - A Second Lease of Life

Acquisition by Go North East of East Yorkshire Motor Services last year has seen transformational progress at a steady pace. One aspect of the continued evolution of 'East Yorkshire' under Go-Ahead ownership has been the transfer of EYMS vehicles away from their traditional operating area. Reading a recent edition of industry magazine RouteOne, a snippet was contained details of a new open-top service in Newcastle. Called the Toon Tour I was intrigued to learn more so did a quick online search and discovered that the vehicles working the service are some of the ousted open-top Plaxton President-bodied Volvo B7TLs that EYMS used to operate the Scarborough Seafront service. More details here.

Crazee Bongos time today with my children. This is a very reasonably priced soft play area to the north of Sleaford and my kids and I are regular attendees. Time was we'd make a day of it and travel from Spalding to Sleaford by train and then Stagecoach 31 bus from Sleaford Station to the last stop in Sleaford, by Pride Park, where Sleafordian Coaches is based. The irregular service pattern of the 31 bus means we have to endure three hours within the walls of Crazee Bongos and while this isn't too bad (they have wi-fi and I have a laptop - many an edition of the LEYTR has been proof-read here!) sometimes it can be too long and my children start crying at everything as they're pooped. Today, we agreed a partial trip by public transport so I drove to Sleaford Station and we caught the 1355 departure on Stagecoach 31 bound for Lincoln.
Stagecoach offers a return fare for the short distance of approximately six bus stops. This costs £2.50. The ticket has a destination of 'East Road Rail', so I simply ask for this each time now, since requesting a return to 'the last stop in Sleaford' is sometimes met with bemusement. Usually the 'motive traction' is an integral ADL Enviro300 and I always promise my son a trip beyond the walls of Sleaford through to Lincoln, though we've never done this. Our return journey into Sleaford is usually more interesting since it involves boarding a lone 31X journey, which is formed of a double-decker as its return working conveys a large number of school pupils. I remember catching this in RoadCar days with LEYTR Archivist Peter Wombwell when MCW Metrobuses ruled supreme. Today it was another integral Enviro300 as the schools are closed. Disappointment all round - I never thought I'd say that at missing out on a trip on a Trident!

I made the most of the last day of my holiday by taking the kids on East Midlands Trains's HST to Skegness. The previous three Saturdays had seen trains in Lincolnshire as prevalent as buses to Tattershall on Sundays. Brief respite before next Saturday's strike action meant I didn't want to miss the chance to take the kids on a HST so close to their home.
Unbelievably every single opposing pair of doors in every vestibule in every coach had a security officer stood at it, preventing passengers from opening the droplight window and sticking their head out. A recent court case found owners of the Gatwick Express service liable for the decapitation of a passenger who **chose** to lower the droplight window and expose his head out of a moving train at speed. Was this a knee-jerk reaction? Surely not, since EMT operates hourly HSTs between Nottingham and London and don't fortify them with security guards.
It transpired that excessive foliage growth had frightened Network Rail into mitigation overdrive. Yet the manner in which costs on Britain's national rail network are calculated, it's probably cheaper to employ 15 security guards for a day than send an engineering train down the Skegness Branch to chop back overhanging trees.
We had two trips by bus. The first was aboard Candy, an ex-Grimsby-Cleethorpes Dennis Trident/Alexander ALX400 (17673 (BLZ 1423 (T373 FUG))) from Skegness Bus Station to Ingoldmells. Traffic was moving fairly freely within the town centre (for a Saturday in August) but it was Ingoldmells where everything snarled up. Operating this kind of route is a logistical nightmare, though financially rewarding. Hunts and Redbus were noted, though only one bus of each. We returned aboard an ex-RoadCar Volvo B7TL/East Lancs Vyking, 16910 (FX53 TXD) complete with roof. The 10-minute frequency had a gap of 24 minutes.
But those travelling were on holiday and in jovial spirits. Candy had speakers playing pop music through the top deck, which was a nice touch and reaffirmed how popular Skegness is as a holiday resort (a recent 'Barometer' column in the Spectator cited Skeggy as the third most popular seaside resort in the UK).
I'd done my research and a Skegness PlusBus was cheaper than a Skegness Dayrider (£4 vs £4.60) and afforded me the option of boarding other operators' services if I so wished. Despite the congestion, our drivers were courteous and dealt with the excessively lengthy dwell times at bus stops while those with luggage, kids, wheelchair, buggies (or all four) boarded and alighted.
Posted by LEYTR