For the past few months, Hackney Community Transport, which goes by its initials nowadays, has been gearing up to take over the bus network in Jersey, after the company's CT Plus subsidiary successfully won the tender to operate services there from 2 January 2013. 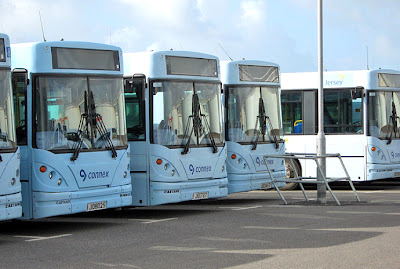 Connex Jersey operates Caetano Nimbus-bodied Dennis Dart SLFs - similar to those operating with Island Coachways on Guernsey (and not dissimilar to those in Gibraltar, though these are left-hand drive). Photo: Wigan Airways

The current operation is run by Connex and while looking at the pay and conditions CT Plus would inherit, quite a can of worms was uncovered. So much so, that the company is not simply continuing the service from January next year, but starting new contracts of employment for all those currently working for the company after unionisation saw working procedures that HCT's chief executive Dai Powell described on his company's website as "repugnant".

The headline facts and figures do show some quite remarkable working practises and rates of pay:

Powell was keen to see changes to much of the above and has succeeded through the termination of Connex contracts and the guaranteed employment of all full-time staff to CT Plus, followed by full-time employment options for existing part-time staff and any further requirements being offered to qualified Jersey residents.

The package offered to (and ultimately accepted by) drivers sees enhancements in all rates of pay, though with management ensuring fair allocation of pretty much everything, CT Plus Jersey bus drivers could earn up to £40k p/a.

The following is the offer accepted by bus drivers (though not before threatening a wildcat strike, which was stopped at last minute following the intervention of the Jersey government):
Not continued is payment for lay-overs in between runs, shift allowance, enhanced overtime rates of pay and performance allowances.

It's quite remarkable that drivers can earn £70k+ a year when they're currently paid less than the new rates listed above, though with union-allocated work, it would appear reasonably possible. Jersey is a very expensive place to live so I wasn't expecting the new rates of pay to be less than those paid to drivers in London - and the above hourly rates are considerably in excess of bus driver pay in London. 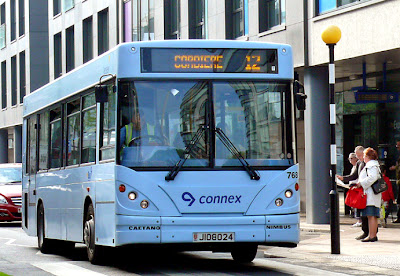 A 45-hour, 5-day week, with one-fifth at the Saturday rate and four-fifths at the Mon-Fri rate grosses £616.50, so annually this could see the driver earn £32,058 and that would be on the assumption of a five-day, 45-hour working week. What the options are for overtime is unknown as the 60 spare duties would presumably be reduced and the drivers removed from them allocated driving work. I suspect the company will start possibly over-staffed. If anyone knows more, please leave a comment.

At the same time I chose to write today's blog, I read Chris Cheek's analysis of Eurostar International, the new company formed last year to bring together all of Eurostar's operations. In the first year there, the average employee pay £45k and that was with employer National Insurance contribution. As a contrast to certain Connex Jersey drivers, it's quite remarkable.
Posted by LEYTR

The wildcat strike did happen, in early October. Two days out. Did the workforce no favours in the eyes of the public but it was the management that ended up looking stupid.