Handed on a plate

They'd never admit it publicly, but the closure of the A4 Hammersmith Flyover immediately before the Christmas was an early present for First Great Western and London Underground. Commuters will only sit in effective gridlock for so long before they feel no alternative other than to leave the car at home and get the train. With the prospect of the Flyover being closed for much of January, long-term contingencies will have been forced upon regular travellers. 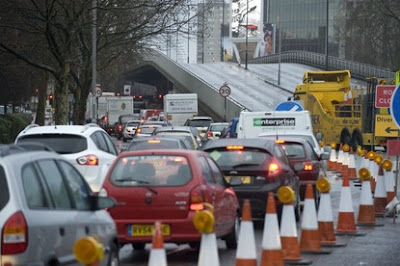 Forcing a die-hard petrol head to leave his/her motor vehicle at home and being forced to consider an alternative is the holy grail for the Department for Transport and transport operators - especially when public transport is the only real alternative (no point car sharing when road gridlock is the issue). Under any other circumstance, the car user's civil liberties would be infringed, under the Hammersmith situation this isn't an issue.

The M4/A4 route into London runs parallel with the Great Western Main Line and considerably higher than normal loadings have been recorded into/out of Paddington. First, who operates the Great Western franchise, already operates most of the country's top 10 most overcrowded trains, so the prospect of many thousand more to convey in the peak periods must be literally incomprehensible. 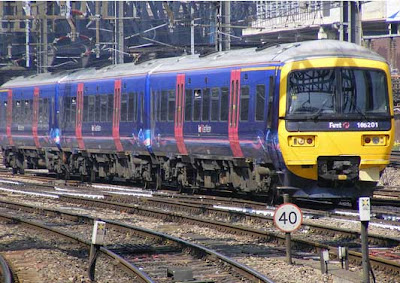 A Class 166 Turbo Express approaches London Paddington. Photo: AndrewHA
Although the Flyover is open to light vehicles today, just one lane presents itself in either direction and the area is still reportedly very busy indeed. It will be interesting to learn the retention levels seen by FGW and London Underground in the area when the route is open in full.

There may be some who are pleasantly surprised at the relative convenience of the train/Tube to the car, though I reckon you'd have to be someone working flexi-time in order to avoid the arm pit-to-nose conditions at the most popular time of the day. Others may see how much money they've saved by leaving the car at home and buying a season ticket of some description. We hear lots of complaints when regulated fares rose by 6%, but more often than not the fare paid is significantly cheaper than using a car to make an equivalent commute.

If only additional capacity had been in place to make the morning peak less barbaric on commuters, the retention levels will almost certainly be higher than they're likely to be. Almost 1,000 days had passed before the DfT made the announcement of an additional order for more carriages on Southern services.

The departure from London Paddington out west hasn't changed since the line was built in 1838. In his Bradshaws Guide of 1866, George Bradshaw wrote:

On departure of the train, it threads the sinuosities of the station at an easy rate, and we have time to notice the metamorphosis that has taken place in the environs of the line; walls have become green embankments, embankments diminished into hedges, and hedges have grown into avenues of trees, waving a leafy adieu as we are carried past. The increasing velocity of the train now conveys us rapidly into the suburbs of the metropolis - past Kensal Green Cemetery on the right, Wormwood Scrubs on the left, and a transient glimpse is obtained of the London and North-Western Railway winding its course towards the midland counties.The route at first lies through the Thames Valley, then, after passing the elevated plains to the north of Marborough Downs, it gradually descends down into the fertile and picturesque valley of the Avon. Emerging from a slight excavation, we come to an embankment crossing Old Oak Common so named form its having been the site of a thick forest of oaks. The village of Acton, which lies to the left, is linked to the metropolis by one almost uninterrupted line of houses, through which the North-Western Junction Railway passes, connecting the North-Western Railway with those of the South-Western.

A very different view is seen from the carriage of a District Line train, of course!