In bed with Brian

Would Sir Moir have ever posed like this? Or Giles Fearnley, David Martin, Keith Ludeman and Dean Finch? 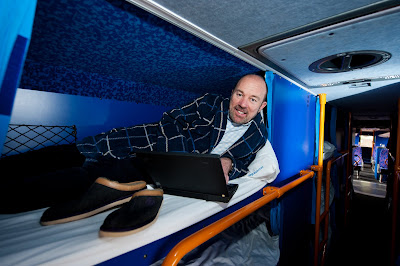 Judging by the splattering of comments on newsgroups and other transport blogs, awarding Brian Souter a knighthood was considerably more controversial than when his counterpart at First was awarded one. No one can accuse Sir Brian of not leading by example and when he innovates others can take years to catch up.

We alluded to some coach-related gossip last week, that Stagecoach's Megabus.com subsidiary would soon be introducing overnight sleeper coach services between London and Glasgow and two days ago this was confirmed when the company issued a press release.

Each of the articulated coaches, specially converted, will house 24 sleeper berths that appear to be three stories high. They will be located in the front portion of the coach, with a selection of standard coach seats towards the rear of the vehicle, after the bendy bit. As with the established London-Glasgow rail sleeper service, a number of complimentary items will be provided: toothbrush, toothpaste, bottle of water, eye mask and a luggage label. Complimentary refreshments will also be available, though details of what this will include wasn't made known.

Having recently returned from travelling the length and breadth of the country by train - two overnight sleeper services included - we've accidentally stumbled across a subject we are reasonably equipped to compare and contrast.

The Megabus sleeper coaches will not come with a host but a second driver. The coaches, by design, are considerably more cramped than the trains, sharing with potentially 23 other people in what are effectively bunks. They are, however, considerably cheaper, with fares from the headline-grabbing £1 through to a maximum £40 being offered. We're pretty sure that a loss will almost certainly be made even at £40 a head. Free Wi-Fi is offered, which is not the case with the trains.

Will the sleeper coaches be operating in addition to the existing coach service? There are considerably fewer seats on board and Stagecoach cites the overnight London-Glasgow coach as one of their most popular. Stagecoach makes a point of stating that the coaches are VOSA-certified. While we had problems with the air-con on our first overnight sleeper recently, our second encounter had very nice chilled air which was most welcome during the summer evening. No mention of air-conditioning is made with the new sleeper coach.

I'm not someone who is able to sleep anywhere very easily. ScotRail's Caledonian Express isn't the most comfortable place to nod off, so, for me, I know a 13-year old Volvo B10MA will be less so.

But for £40 maximum, can you complain?

There are some who will not consider the coach to be safe enough, despite its legal certification. Others will welcome this as an addition to the Megabus brand. It's certainly something I'd consider to say I've done it, but I don't feel I could count on feeling as refreshed upon reaching Scotland as I could by train. But I suppose the train always wins on the comfort scale when compared to the coach. Where it loses is on value for money - something the new sleeper coach could excel.