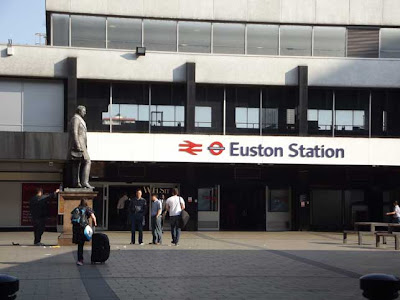 Sunday dawned with a relatively early departure from London Euston - the 0810 Virgin Trains service to Manchester Piccadilly, which is the company's first train of the day, operated by 390041 today. 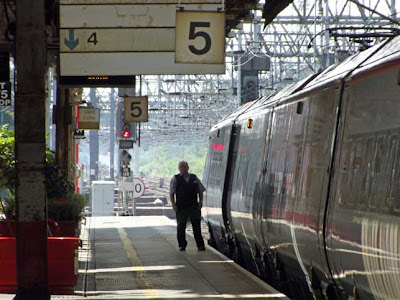 We had a leisurely run to Crewe, where we departed. An additional fifteen minutes is given to the running time of this journey on a Sunday, in case it is needed to operate via Northampton due to engineering works. This wasn't needed today and we ran early after Milton Keynes, being made to wait south of Stafford before being allowed to pass through that station. Our guard was a very jolly chap with a very strong Cockney accent.
390041 dpearts Crewe bound for Manchester Piccadilly. 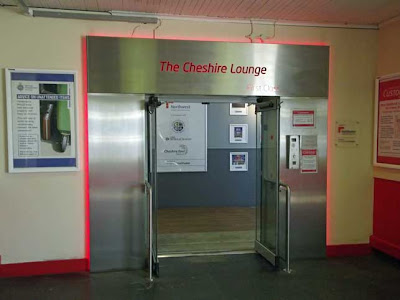 We were told on Twitter that Virgin Trains' First Class Lounge at Crewe station is claimed to be haunted. The Cheshire Lounge features on the Strange at Crewe - Crewe Station Ghost Tour. 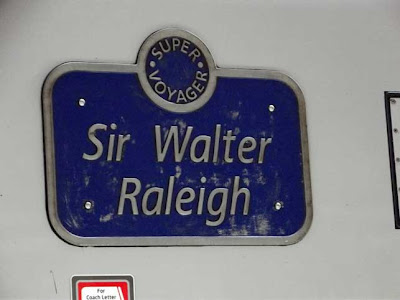 Virgin Trains names a great deal of its trains, both Class 390 Pendolinos and Class 221 Super Voyagers. We caught the 1042 service to Holyhead, worked by 221113 which is named Sir Walter Raleigh. 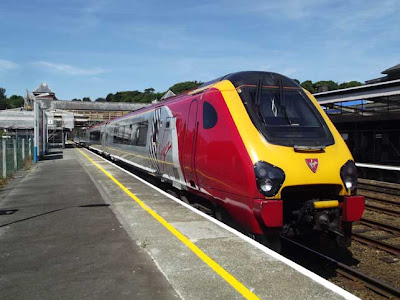 We alighted at Bangor, the last stop on mainland Wales, in glorious sunshine. The journey along the North Wales Coast was superb, with some excellent visibility. Today was the warmest day of the week-long Railrover jaunt. 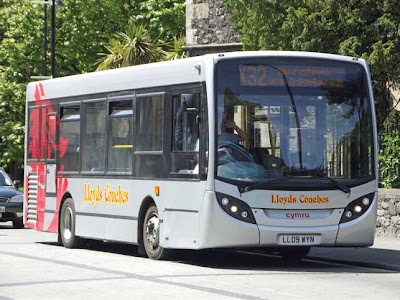 We headed into the city centre where we had a fair amount of time to wait for our next service of the day - the first bus ride of the jaunt, operated by Lloyds Coaches. Service X32 is part of the TrawsCambria network of inter-urban bus services, with Lloyds Coaches providing one return journey on Sundays between Aberystwyth-Bangor. We caught the last departure of the day, leaving Bangor aboard LL09 WYN, an ADL Dart/Enviro200, at 1315. 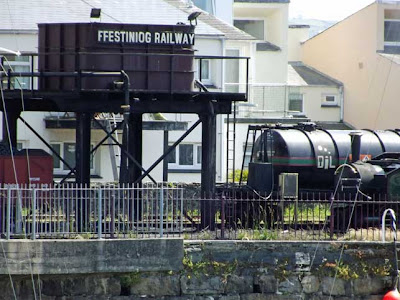 1:10 minutes later we arrived in Porthmadog, alighting at the High Street stop. The Ffestiniog Railway can be seen due south of the bus stop and we headed in that direction in glorious sunshine. Before crossing the harbour on a road bridge (which has its own narrow gauge railway line heading towards Caernafon, which has only recently opened) we took this photo of one of the locomotives being watered.
Iarll Meirionnydd is seen here running around our train before working the 1500 departure.
We depart Porthmadog station on time at 1500.
Off The Cob 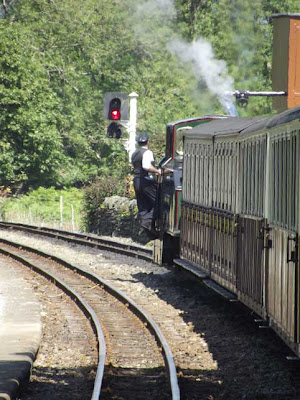 We caught a departure not in today's blue timetable. A lineside fire had temporarily closed the line for a short period earlier, so an additional 1500 departure was operated. We'd planned to catch their 1600, so cut our time short in Porthmadog and jumped aboard. You'll note the use of elecronic signals - very rare on a miniature railway used for tourism.
At the passing loop located in Minffordd station, Merddin Emrys arrives with a service to Porthmadog. 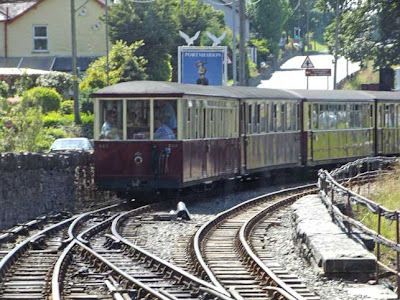 Much of the railway is single track, with trains passing at loops added to a number of stations en route. The first is at Minffordd, where at 1513 the Porthmadog-bound service interchanged and left before we did, changing onto our tracks at the end of the station. 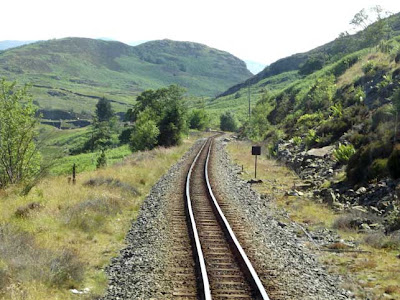 The manner in which the single-track line meanders through the countryside is evident in this shot. 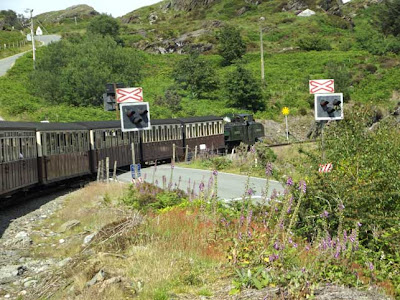 A couple of level crossings have employees of the company working gates, while the majority are not controlled in any way at all - here is one gate-less crossing close to our terminus at Blaenau Ffestiniog. 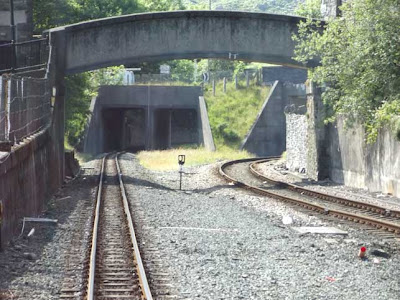 We draw into our terminus at Blaenau Ffestiniog and the national railway line can be seen to the right. It's worth pointing out that the first railway line to be built here was that of the Ffestiniog Railway, with the mainline gauge coming a number of years later. 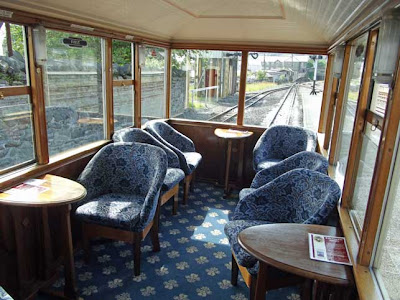 The rear carriage in our train offered a panoramic view, which enabled us to take some excellent photos. 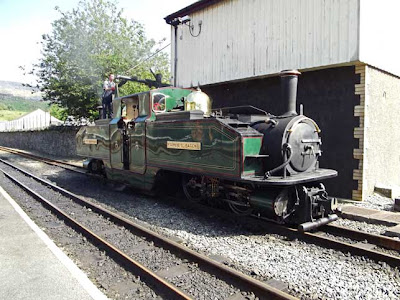 Our train, Iarll Meirionnydd, is watered at Blaenau Ffestiniog before running round the train and being coupled to the opposite end. 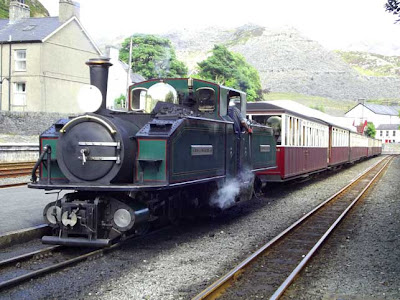 The train operated a 1630 departure, again, not advertised owing to the earlier gap in service due to the lineside fire. The turnaround time took just 10 minutes and the following video of the train's departure was so swift it took me by surprise: 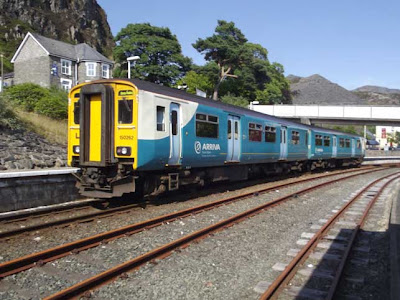 We were fortunate to catch the Ffestiniog Railway's unscheduled departure as it gave us a 1:10 connection in Blaenau Ffestiniog, not what we'd planned, just 0:10. We hoped the Arriva Trains Wales departure at 1730 to Llandudno would await our departure, should it be late, but we saw no evidence that it would do so. Here 150262 arrives. 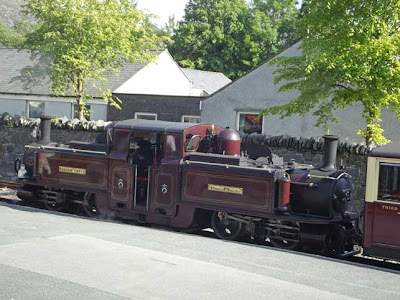 At 1724 Merddin Emrys arrives from Porthmadog, having worked the advertised 1600 departure. Getting across the platform to where the Arriva Trains Wales service departs is not as straightforward as it looks, and I'm sure that had we caught this train as planned, we'd have been rather anxious and enjoyed the end part of the journey less. 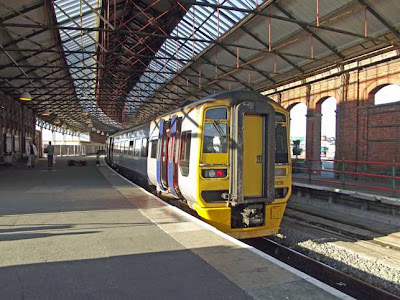 We left the ATW Sprinter at Llandudno Junction. It arrived earlier than scheduled, so we were able to catch a train we'd not planned - the 1827 Arriva Trains Wales service to Holyhead, worked by 158839. We had a lovely run along the North Wales Coast again, and over the Menai Bridge into Anglesey - a location I'd never been to before. We had an overnight stay here before heading south to Cardiff on the first train of the day in the morning.