It must be over a decade ago that I first spotted a designated Quiet Coach on a train. My father describes this and similar modern-day 'initiatives' as SOOT: Sign Of Our Times. I tend to agree with him here. It is a sad indictment of society that a carriage on board a train has to be designated 'quiet'. In many ways it confirms that public transport is no lesser subjected to the anti-social activities of a minority of travellers.

Noise is the problem - specifically too much of it. Time was when people would read or simply converse on a train journey. Then mobile phones came along en masse from the late-90s, so annoyingly loud one-way conversations could be heard (never better parodied that Dom Joly in his Trigger Happy TV programme). Today we have mobile phones that are (actually very good) music devices and can be connected wirelessly to the Internet in order to play movies and videos. 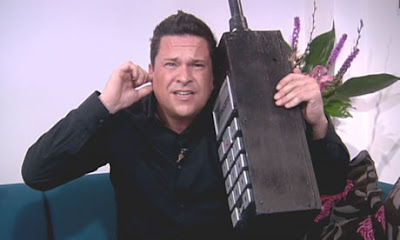 "HELLO!?.....YEAH, I'M ON A TRAIN...THE QUIET COACH..."
I recently made a journey with East Coast from Peterborough to Newark, for an article in a forthcoming LEYTR magazine. Unusually for me I purchased an on-the-day ticket (a Cheap Day Return) for travel betwixt both points. This meant I did not have a seat reservation so had to find one amongst all those that did have slips of paper above them. On my return from Newark I found most seats available in the Quiet Coach (Coach B).

East Coast has displayed notices informing passengers that they are sat in the train's quiet coach and that phone calls need to be made in the vestibules at the carriage ends, that electronic equipment must be operated in silent mode and that conversations with fellow passengers must be kept as quiet as possible. You can't argue with any of that and if you did have a problem there are a number of other carriages you can opt to travel in.

However, Coach B of the 1818 Newark Northgate to Peterborough train yesterday, was not at all quiet. I heard rather graphic details of a conversation taking place two places behind me, where a man had been cheated on by his partner; a drunken Scots woman was making a phone call almost opposite me and a young girl in the seat in front was listening to music through headphones so loudly that I could hear the lyrics (Snoop Dogg, if anyone is interested). 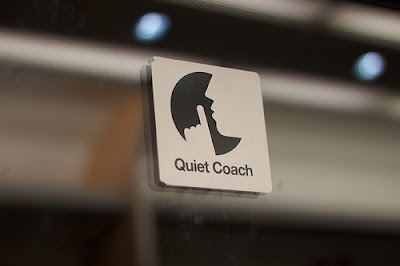 East Coast affixes stickers like this to the window of its Quiet Coaches
My journey lasted but 29 minutes, so I wasn't unduly bothered, just very critical of the installation of a Quiet Coach when policing it is almost impossible. I'm sure guards are equipped with procedures in dealing with noisy people in these areas: a passenger can be asked to make a call in the vestibule but can everything else really be enforced? One person's idea of a loud conversation with the person sat next to him is not the same as another's. The girl in front of me had at least chosen to plug headphones into her iPod, whereas a growing number believe it is acceptable not to.

Specifically, had the events in Coach B occurred in any other section of the train in which I'd been travelling, I wouldn't have raised an eyebrow. As it was, the Quiet Coach actually made my journey less enjoyable. Operators who provide these sanctuaries of silence, I believe, are merely box-ticking. Enforcing their effectiveness is another matter.

I'm not convinced that phone calls on trains are such a great nuisance. Video and audio players without headphones, yes, but that shouldn't be allowed anywhere on the train.

If people are that bothered by noise, then the general principle of a quiet coach is OK - as long as there are plenty of alternatives. But look at when, say, Crosscountry runs a train with just four coaches and makes one of them a quiet one. Expecting a quarter of all your passengers not to need or want to make a phone call is ridiculous - and much more annoying than the actual calls.