We mentioned the new kid on the block in yesterday's post and plan to detail the new fortnightly publication in more depth now. 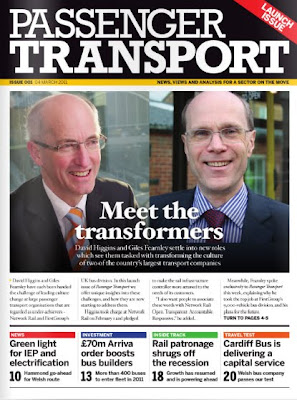 Issue 001 went live in March
Getting straight to the point, this is almost certainly the format New Transit should have taken, rather than getting hung up on 'synergising' with everything and everyone. I would like to think that two years ago when we politiely criticised the 50% cut in Transit magazines when the new format was adopted, that some working in said publication also felt that perhaps they were not being forced in the right direction as Passenger Transport is produced and edited by the former Editor and Assistant Editor of New Transit!

Passenger Transport's managing editor and publisher is Robert Jack and his deputy is Andrew Garnett, both having left New Transit within what seemed like days of each other. Such a twin departure is very unusual and I'm sure there will be a story to tell!

However, every cloud and all that... has seen Messrs Jack and Garnett produce a publication that fills a most definite void in the market. Passenger Transport contains 32 pages and details transport news stories of the past fortnight. Specifically, in-depth balance sheet analysis is undertaken and reported, with the latest edition devoting two pages to National Express Group's 'bounce back' in a style identical to the old Transit. The omission of this information in New Transit was one of our main criticisms. 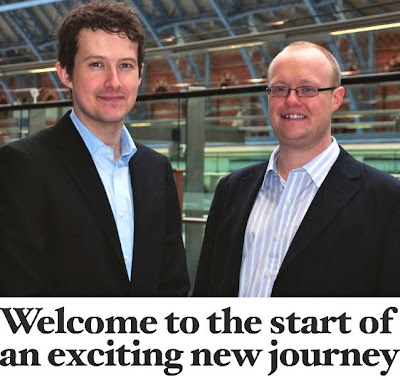 'exciting new journey' is a little cringeworthy, but we wish them both the best of luck. LEYTR subscriptions have not been hit by the financial downturn and if this is anything to go by, demand still appears high for a paper publication
Each Passenger Transport magazine (of which there have been four to date) omits a load of froth that can often consume the first few pages of some magazines (adverts and an extended contents page), and has a detailed story on its front cover; the editorial is on page 2 and then a lead story on 3 and another on both 4 and five. Pages 6, 8, 9, 10, 12 and 13 are devoted to transport news stories (16 in total) then 4 pages devoted to analysis - NEG and rail patronage growth following the release of latest figures. Alex Warner appears to have a regular two-page feature where he reviews rail journeys (this week Arriva Trains Wales, last week was Virgin). Two pages have been devoted to letters from readers (x3) followed by a fascinating two-page spread on Edinburgh's trams and how some may end up in Croydon.

Most industry publications seem to need to have a Westminster Insider and Passenger Transport is no different, though theirs writes the regular one-page Homer's Odyssey column, in which s/he imagines how the DfT's permanent secretary might be feeling right now, off-the-record of course. Towards the back now and 4 pages are devoted to events and event reports and one for careers. The back page is similar to most industry mags with tongue-in-cheek short reports (I do believe we featured in Issue 003, though they managed to re-word our trivia question so that it actually made sense!).

One would hope that with increased subscriptions will come the confidence to extend the news stories and analysis. Despite there always being room for more news stories in my mind, what there is appears to be of considerable substance. Photos are limited though in some cases appear very large, presumably to fill a page where text is limited.

Now to the price. I will admit to seeing the price tag and feeling a little disheartened, but I was comparing it with New Transit. There are double the number of editions of Passenger Transport a year than New Transit (possibly four times the number if New Transit start to double-up as they did with January/February), so the annual cost of £140 equates to £5.83 per copy (or £4.38 with a special offer that runs until the end of the month) is very favourable to the £7.92 that New Transit equates to.

Admittedly New Transit offers access to articles and archives online but (and I hope Passenger Transport appreciated this early on), not everyone wants to spend hours clicking away online - we like to be able to browse our magazine on the bus or Tube or in the queue for the temporary traffic lights that have been there for three weeks now and no work to show for it!

A special offer for 3 years' subscription is currently available, costing £281.25, which equates to £3.91 per copy. This is the same as Buses magazine but produced twice as often with more detailed and in-depth stories and analysis that very much appeals to us both.

In summary, if you felt New Transit headed in the wrong direction and that you want a detailed, informed transport magazine that doesn't make you gag by trying to offer synergies with everything, Passenger Transport is well worth a read. We hope others feel the same and are able to commit financially to this worthwhile publication. £281.25 might seem a lot, but we plan on dropping one of our subscriptions this year thereby saving just enough to splash out on Passenger Transport.

Our only criticism is that currently much of each magazine can be read for free online at the moment. We hope the plan is to limit this significantly in the near future.