The Office of Rail Regulation (ORR) has charged both Network Rail and construction company Jarvis with "failure, as infrastructure controller for the national rail network, to provide and implement suitable and sufficient training, standards, procedures and guidance for the installation, maintenance and inspection of adjustable stretcher bars (part of the points)". It is to prosecute both organisations at the start of next year, in a case to be held at Watford's Magistrate Court.

The incident? You don't have to be a rail enthusiast to remember the Potters Bar crash, when a WAGN Class 365 derailed as it approached Potters Bar station at 1255 on 10 May 2002. The rear car flipped and then slid onto the platform itself coming to rest against a platform canopy at a 45-degree angle. 7 died and 76 were taken to hospital suffering from a range of minor to life-threatening conditions. 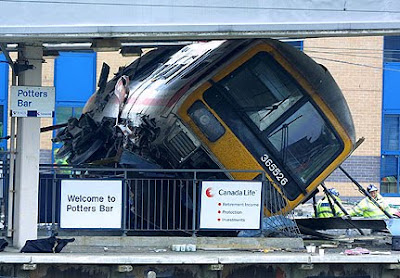 The accident occurred as the result of the final set of points failing, though this didn't occur until immediately before the rear car passed. The train, 365526, was working the 1245 King's Cross-King's Lynn when the accident occurred - matters compounded by the speed at which the train was passing the station: 97mph. It is no consolation for the families of those who died, but had the points failed as the leading car travelled over them, the death rate would surely have been many times higher than seven.

The Health & Safety Executive (HSE) soon diagnosed the set of points as the cause of the crash and that they failed due to being in a poor state. Jarvis, the private contractor Network Rail's predecessor Railtrack had employed to maintain the track, initially took the defensive, with their chairman and one-time London mayoral candidate Steven Norriss being interviewed on BBC News 24 claiming "irrefutable evidence" had come to light that proved Jarvis was effectively in the clear. The inference was that sabotage was to blame, but nothing of the sort ever materialised. Indeed, the HSE noted a number of points in the area showing signs of defects that ultimately caused the crash.

Jarvis had identified the set of points required attention, but the company's "inadequate reporting system" saw directions to the points in question become unclear and workers ended up at the wrong end of the platform attempting to repair an operational set of points. This episode is seen as the catalyst for the announcement by Network Rail in 2003 to bring all maintenance works in-house. Jarvis also accepted "legally justified claims" made by families of those killed and put aside £3 million. 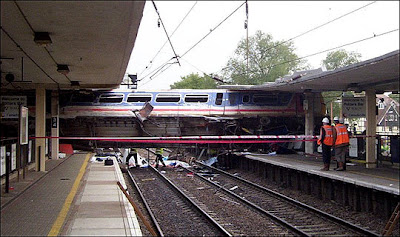 LEYTR Comment: They said two years earlier that the Hatfield crash involving a GNER Class 91 was the turning point for the railway. Yet two years later yet another serious crash took place - less than 5 miles from Hatfield. The stricken rear car of the '365' resting at such an angle in such a public manner was in itself devastating for the rail industry and showed how vulnerable passengers and innocent bystanders are when just one set of points has a defect. This ultimately saw off Railtrack, which was replaced by government-controlled Network Rail during the same year. Now, the ORR is to prosecute both NR and Jarvis over what it sees as not providing sufficient training, standards, procedures and guidance for the maintenance of the national rail network. To NR's credit, all recommendations made by the HSE and the industry's formal inquiry have been carried out to the full and private contractors no longer play any part in track maintenance. Jarvis entered into administration during March this year and a prosecution will not help its long-term survival prospects.

What the prosecution does show is that the requirement for adequate training and all the facets the term covers is absolutely vital to ensure something like this never happens again. We may grimace when we see workers being given the H&S speech before work can begin, but the Potters Bar rail crash, sadly, is proof of what happens when this is lacking.