This is both a genuine look at what is headlined to be a genuine act of entrepreneurial flair that is just what the Coalition government is looking for to ensure the country's fortunes improve as fast as possible and also a tireless plug for our LEYTR magazine.

Saturday's Grimsby Evening Telegraph ran a story in which it detailed how a new generation of 140mph trains could soon link the town and neighbouring Cleethorpes with London in 2:40. Trains would travel between Cleethorpes and London calling only at Grimsby Town, Habrough, Scunthorpe and Doncaster.

The 'new' venture is by Alliance Rail, headed by Ian Yeowart and originally backed (so surreptitiously it was seen as a secret!) by Arriva, though now Deutsche Bahn. There's no secrecy about the company's financial backers anymore. The company will operate using the GNER name as this was abandoned when Sea Containers - the parent company of the original Great North Eastern Railway - went into liquidation and surrendered its flagship GNER company, which then passed to National Express and now into public ownership.

Purchased by Alliance Rail is the name Great North Western Railway, as the Cleethorpes-London plan is but one of a host of new routes under consideration - six in total. 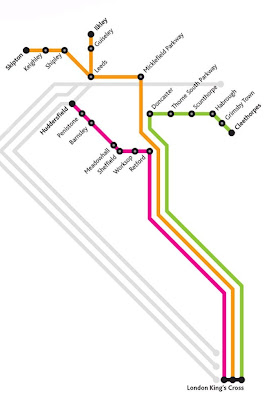 North East Lincolnshire inhabitants will have been rightly encouraged by the proposals, as they do have restricted transport links owing to the area's locality, nestled in the arm pit of the Humber. Regrettably, though, we detail below a number of sticking points to which the 'Telegraph' article did not air:
We're not poo-pooing the plan to operate direct trains between North East Lincolnshire and London, just shining the cold, harsh light of day on what has been published so far. Local residents ought to be better informed.

Readers will also be a little shocked to see news from the LEYTR area being discussed on the blog (we normally avoid this to ensure our LEYTR magazines continue to offer unrivalled local information). Those who receive the LEYTR magazines, however, have already read this information - we detailed it on Page 138 of the November/December 2009 edition.