This is the calculation National Express tried to press on us when it was detailing the improvements to its second generation of Caetano Levante-bodied coaches. Specifically, the new lot have 48 seats, not 49, with the loss of a seat on the back row. It makes sense as when there are three seats here, the person sat by the toilet is continually disturbed by visiting lavatorians.

Photo: Malcolm Crowe
However, the spin NX placed on their vehicles having one seat less was nothing short of fantastic. It shows that, with the right words, you really can make 49-1 = 50.

Essentially, NX chose detail say that their new Levantes are one seat lighter than the first generation. Goodness knows why since no one's bothered. In so doing, they claimed that not only does this make no difference to the coaches' capacity, it, moreover, has seen an increase in a seat by 1. Why? Well apparently, on coaches crewed by two drivers, the one undertaking a rest period used to occupy the front double seat, thus reducing the capacity from 49 to 47. Now, with a crew seat fitted to the Levante (1st gens didn't have them) no driver-occupied seats exist so a further seat has magically been added.

I guarantee no passenger without a passing interest in the industry will have spotted that this means very little indeed. Even with a crew seat-less 1st gen Levante, 48 seats were still allocated and the driver was not afforded both seats in a double. So the calculation actually is 48-0 = 48.

In practice drivers still occupy a double seat behind them, be they alone or not. Travelling back from Scotland last year, m'colleague and I were informed our hand luggage was too large and ordered it be place in the boot. I protested and snuck it on as the guy didn't follow through on his order. My hand luggage comfortable fitted in the overhead locker. No sooner had we boarded the coach, we were met with this image: 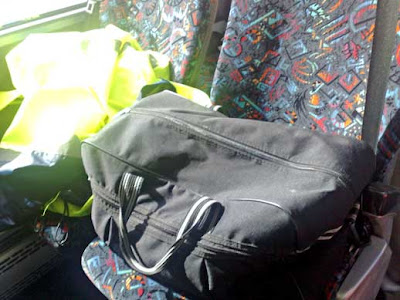 It would appear that Park's of Hamilton drivers on the 534 (single-manned) have special dispensation. Even worse was that our driver's bag was twice the size of mine
NX does not allow this. They haven't done for a very long time. Many coach drivers have grown to expect at least the first offside double seat as theirs. For the public to be told that a 48-seated coach actually sees a seat freed up as a result of the inclusion of a crew seat is fanciful to say the least. However, it was a very cleverly worded sentence in the press release and we both give a ridiculously illustrious bowler tip to the company for including it.