Much has been written on the decision by Wellglade to introduce a bus route between Cotgrave and Nottingham, operated by their low-cost Midland General subsidiary, where both the fare and route number are the same - 99p. But what has yet to be commented on is the far-reaching implications of the new timetable.

For it appears to be the first time that a publication has been released by Wellglade in the area dominated by its award-winning Trent Barton subsidiary that has seen the 24-hour clock used. 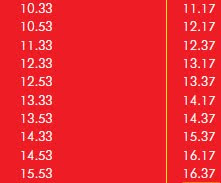 Has anyone told Barry Doe?