Black is the colour

Consider the humble colour black. It doesn't usually look good when covering every part of a bus' exterior. Yet despite this, it was the livery of choice for CT Plus, the commercial arm of Hackney Community Transport, who snatched the operation of a Hull-based park-and-ride contract from East Yorkshire Motor Services (EYMS) just over a year ago. The decision made by Hull City Council to award the Priory Park & Ride contract to CT Plus, despite EYMS operating the contract without fault since its inception and providing a bid that offered better value for money for the local council, caused controversy locally. 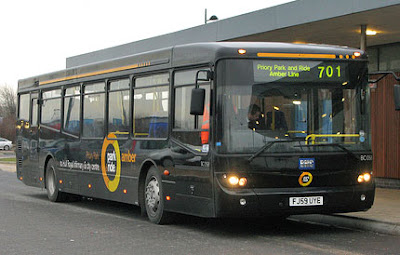 CT Plus operate six BMC Condors on the 701 park-and-ride service
From 26 April, however, in a move seemingly unconnected with the above, EYMS re-branded its Service X55, operating between Hull and Gilberdyke via Brough. To mark Brough's link with its Roman settlers, the route has been branded with the name the Romans gave to Brough - Petuaria. The Petuaria Express uses two brand-new Volvo B7RLEs with Wrightbus Eclipse Urban bodies and operates to an hourly frequency. EYMS claim the Brough-Hull journey time rivals that of the train when walking times are included. 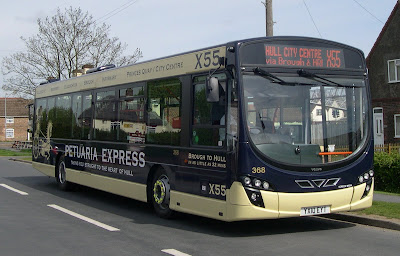 EYMS' Petuaria Express branding for its Hull-Brough-Gilberdyke service
What is not made known in the press release is that the route taken by the X55 Petuaria Express heading into Hull, is identical to that used by the park-and-ride service CT Plus now operate, and it won't have escaped your attention that the EYMS vehicles are sufficiently black enough (officially 'indigo') to be mistaken for a BMC Condor!

Having said that, an hourly frequency isn't really enough to prove serious competition against the ten minute frequency Park & Ride :)