A new seven acre bus garage in London was officially opened last month. The new depot is the greenest in the country. East London Bus Group's (ELBG) West Ham depot had its ribbon cut on 14 July, though had in effect been operational for many months beforehand.

Built on the old Parcelforce site, the depot is, so far as we're aware, the only one in the country to boast its own wind farm (albeit on a much-reduced scale). While the new depot has just one example, it - as with its sisters that have been popping up all over the country in the past decade - dwarfs the fleet of traditional red London double-deckers at the new facility, funded jointly by ELBG and Transport for London (TfL). An over-sized yet skinny windmill is just the beginning. Passers-by are unlikely to spot the new biomass generator, though, they should find it easy to spot the grass roof, designed to capture and then recycle rain water. 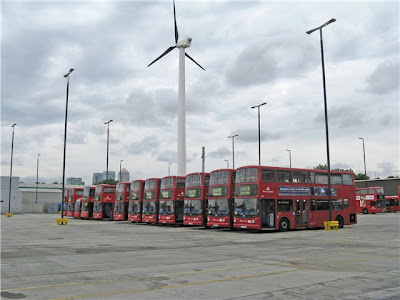 More akin to the North Sea or the Lincolnshire Fens are wind turbines. One has been given pride of place in the new, eco-friendly West Ham bus garage which opened recently
A new shuttle service linking the depot with West Ham station has begun operating, which acts as a means to see fewer drivers bring their cars to work. All combined, the depot operates one-fifth on renewable energy sources, and is expected to reduce its carbon footprint by 27%, making it the greenest in the country.

It's a shame that, on the subject of staff buses, too many operators have chosen to withdraw or limit their operation. Rather than such a scheme's green credentials be lauded, the physical cost of providing a bus and a driver for an hour or so is instead quoted. For depots located a fair distance from housing or those that have very poor parking provision for employees, the introduction of staff buses could, provided they operate in a manner befitting work patterns (and be routed to ensure they are truly convenient to as many as possible) could offer considerable benefit to employees which would additionally reducing the number of cars on the road.

Housing a maximum of 320 vehicles, the new West Ham depot certainly looks the part. In London, where the physical constrain of land makes such projects very difficult to undertake, both partners and the contractor should be congratulated.

Nice blog. Thanks for providing such a wonderful info.
For more information about Sell Your Vehicle; visit the website http://www.recyclemotorslimited.co.uk/.

You may be eligible for a new government solar energy program.
Find out if you're eligble now!