"To refer to YourBus as being part of the Rotala group just because of a tenuous connection at board level is like saying Norfolk Green is the same as Stagecoach Manchester".

This is what a credible and respected contact within the transport industry told me when I kept referring to YourBus as something Rotala was assisting with in a number of perfectly legal and above-board ways.

To some extent, my contact's statement is correct. Two of the Dunn brothers sit on the board of the AIM-listed Rotala Group and another member of family (i.e. not the same person) heads up YourBus, but is this as tenuous as saying Norfolk Green is managed in the same way since its MD was a former Stagecoach manager who, in keeping with all Stagecoach employees at that time, was offered shares in the company?

Then I stumbled across the following:

Exhibit A - YourBus driver poses for a photo 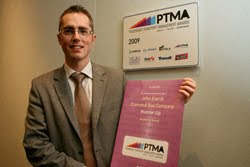 Spot the difference? I don't think there is one!

Rotala's marketing manager offering his services for the YourBus launch is perfectly acceptable and legitimate, it is just one of the many ways to which I alluded that YourBus and Rotala assist each other.

**UPDATE** Sirs, The chap featured above is the Diamond Bus Company's (Rotala-owned) Marketing Assistant, not the Marketing Manager for Rotala. The direct connection between Diamond Bus and Your Bus is Scott Dunn - the MD of Diamond, who uses staff at Diamond to provide various back office functions and I can assure you that such work, as well as the loan of vehicles, is charged to Your Bus at the correct rates. I hope this clarifies matters.

Oh, very clever. I knew links existed but the Rotala marketing man on YourBus publicity? I doubt Sir Moir would go down well on a Stagecoach timetable.

Perhaps they're dopplegangers? Dopplegangers who swear by the same Windsor knot!