On Sunday at 0810, the first of the new coaches for Trent Barton's flagship 'red arrow' coach service took to the road, bound for Chesterfield. Being one of TB's newer routes, the red arrow links Nottingham and Derby city centres every ten minutes with a half-hourly extension north of Derby to Chesterfield. There have been a number of different vehicle types used over the past few years, though the staple diet of the route is the Scania K94/Irizar Century. 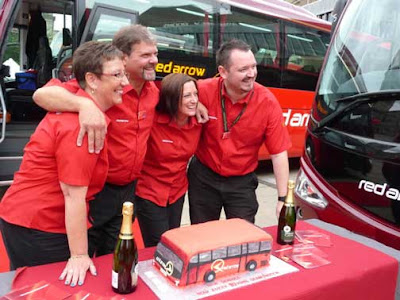 Photo: Barney Cam
However, an increase in frequencies was decided and in order to meet demand a number of new coaches were purchased. Chesterfield saw its hourly service double and Derby-Nottingham has seen an extra two coaches per hour, taking departures here to one every 10 minutes.

Five new Scania/Irizar Centuries arrived over the past few weeks and, my, how the Irizar Century body has changed over the space of six years. Immediately noticeable is the mid-entrance door for wheelchair users. The front end looks a lot lower, offering a more accessible entrance for all able-bodied passengers. The vehicles are numbered 72-6 and registered FJ10 OXM/N/P/R/S. 73 is named 'Dean Thornhill'. The coaches offer leather seating and climate control. 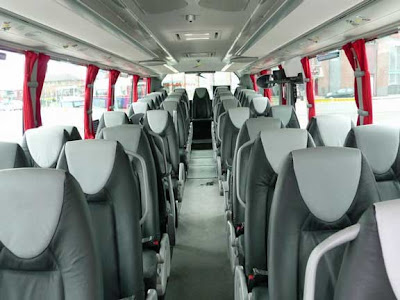 Now there are promotional events and then there are Trent Barton-organised promotional events. Their effective roadshow took in Derby's market square last Friday and Nottingham's on Saturday. Free cake and promo goodies were in abundance and I'm sure a good time was had by all. 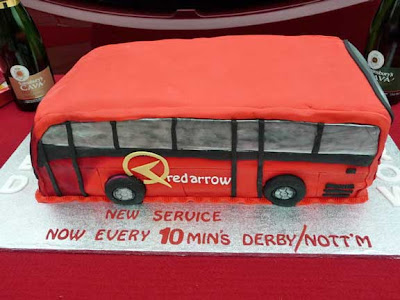 Photo: Barney Cam
The red arrow uniform appears to have been downgraded to more a 'smart casual' affair than its urban counterparts and the omission of a tie (in the opinion of someone who has a few in his cupboards) is very disappointing. 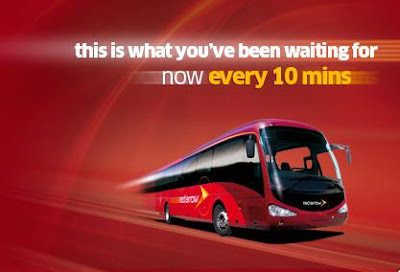 The press pack was in attendance more so on the Friday event, but both days received excellent coverage on local radio and TV. The red arrow has its own facebook page which appeared to go into melt down in the days before the promotional events. Trent Barton was arguably the first of the current breed of media savvy bus and coach operators and while it is impossible to guess just how much additional goodwill it has received from its now well-established online presence and deep-rooted brand identity, the company will be quietly confident that no one else could have the same impact it has. 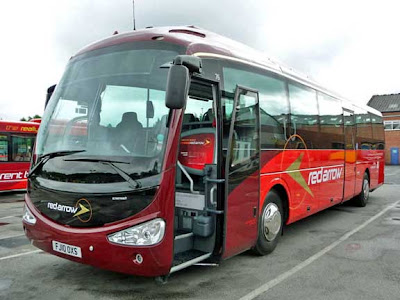 You can tell the body design is based on the Irizar Century, but the deeper front windscreen and raised roof are but two modifications made since Trent Barton last purchased some of this type in 2004
The increase in frequency and new vehicle intake has seen some subtle improvements made to the red arrow. The biggest boon to passengers boarding in Derby will be the introduction of a check-in desk by the coach's departure gate, so that passengers can save time by buying their tickets before the coach has arrived. It also makes matters considerably easier for the driver, too. This isn't a new concept for Trent Barton, though, as I've seen it in operation in Nottingham Broadmarsh bus station with their 'indigo' service. A nice touch - something many operators shy away from, however, as it's 100% labour intensive and the revenue received is likely to be identical to that cashed in by the driver if he did it himself. It will clearly aid reliability and show the company is willing to put its money where its mouth is. 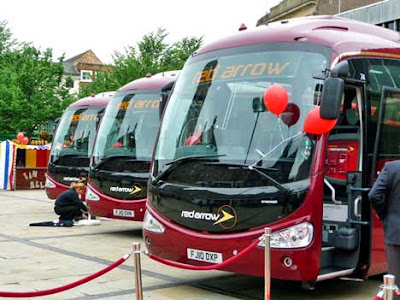 Photo: Barney Cam
We've both travelled the red arrow on numerous occasions and while it suffers the same problems with peak time traffic congestion in its city centres and the Clay Cross-Chesterfield corridor as all other services of this type, the doubling of frequency certainly shows ridership is growing nicely. When a 'big hitter' like Trent Barton undertakes such a upgrade, you know all bases have been covered.

Thanks for the story and nice write-up; the only thing I'd wish to correct is that we dressed in the uniform casually at the launch for a good reason - in reality, drivers do wear ties as normal (trent barton ones for now, pending delivery of new red arrow ties in the next few weeks)