There were some strange goings on at King's Cross station last week and it was not just the filming of the new Harry Potter movie. Those nice people at Virgin Trains must be over the moon that their Mk3 'Pretendolino' will have a starring role in the film, but also that for four days - including through the peak periods - the branded Virgin Mk3 set was there for all to see as they either arrived or departed from the station.

Without the Harry Potter filming we suspect that had Virgin asked to stable its Pretendolino in King's Cross for four days, the answer would have been a curt 'No'. That said, it seems that Virgin Trains' PR machine saw opportunities, with one of its press officers seen lurking at the end the platform. An avid LEYTR reader watched with interest and then repeated the Virgin Trains PR-man's shot. And here it is... 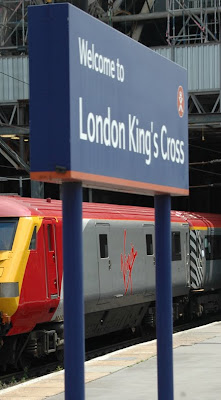 Perhaps with an eye to the next franchise, the 'Welcome to London King's Cross' message provides an ideal setting for Virgin Mk3 set in the background?

Ironically the year that the 19 years later scene was set in the final HP film was 2016/2017 and who runs the franchise? Virgin of course!

Ironically the year that the 19 years later scene was set in the final HP film was 2016/2017 and who runs the franchise? Virgin of course!