What does the following photo and the statement in The Spectator have in common? 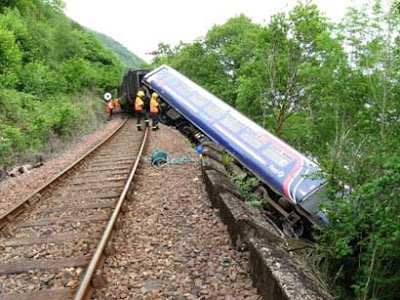 This is the scene that the RAIB (Rail Accident Investigation Bureau) were faced with on Sunday evening as they initially tried to make sense of why the 1820 Glasgow-Oban Scotrail service derailed (Photo: Railway Eye)
This is a one-liner taken from an interview with the Spectator in which new Transport Secretary Philip Hammond intimates that he'd much prefer a job as Chief Secretary to the Treasury:

"If I had been a Liberal Democrat, I would have been there before him", referring to the recently sacked David Laws.

Both have gone down hill very fast indeed.