It has been revealed that trains in Wales are the most heavily subsidised of all rail services here on mainland Britain, following statistics revealed by the Office of Rail Regulation (ORR). 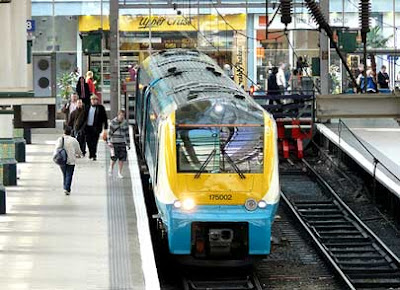 Arriva Trains Wales' Class 175 'Coradia' is seen here at Manchester Piccadilly, awaiting departure for Carmathern. This TOC receives subsidy to the tune of almost 12p/pax km
The news came as details of the subsidy received from all Train Operating Companies (TOCs) was released. Arriva Trains Wales received 11.3p per passenger kilometer in the tax year ending March 2009. The total payment received from the Department for Transport was £114.6 million. While this is a considerable sum, rail services in Wales are more dense than in Scotland, where ScotRail received an eye-watering £222.4 million in subsidy, equating to 8.6p per passenger kilometer.

Scotland's First Minister - who's never not campaigning as if a general election was just round the corner - would surely struggle to maintain subsidy at this level for his country if the financial link with Westminster was cut. There had been mediocre rumblings within the Scottish Parliament for ScotRail to be nationalised the last time its franchise renewal was due, though many would argue this is already the case! 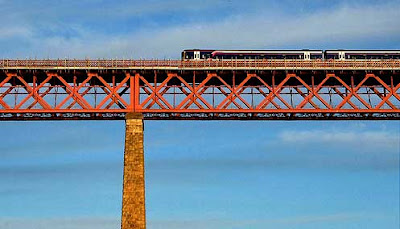 ScotRail is one of three TOCs to cross the Forth Bridge and seen here is one of its Class 158s heading north. This TOC receives the most subsidy of any operator, standing at almost a quarter of a billion pounds last year
It's worth pointing out that the RMT union continually campaigns for renationalisation, yet in effect this has already happened - with Network Rail being a state-owned company, not to mention the most prestigious rail franchise - East Coast, and the cap-and-collar payments that see revenue risk passed to the government in 'bad times' (with profit shared between TOCs and the DfT in 'good times') seeing a financial responsibility pass to the state here.