Details of our recent Mediterranean jaunt have been put on hold while we bring you an exclusive:

Virgin Trains is set to bid for the East Coast rail franchise again, LEYTR has learned.

In a letter to Virgin Trains’ staff thanking them for helping the West Coast train operating company achieve the highest ever satisfaction score, Sir Richard Branson has given the strongest hint yet that his Virgin Trains business will bid for the prestigious East Coast franchise. 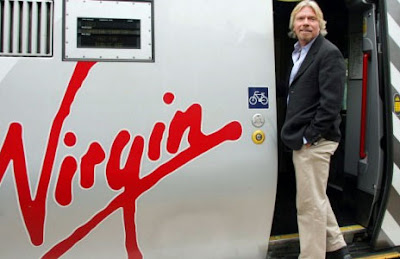 Sir Richard Branson has the potential to control both Anglo-Scottish inter-city rail franchises, should his company's potential representations to the DfT for East Coast bare fruit.
Sir Richard says: “Looking forward, we now know that the East Coast franchise is available – again – and we will be keen to be involved to bring our standards to new customers on that route.”

But Sir Richard also says that West Coast will not be neglected saying: “I am desperate to take our achievements to another level and there is no doubt we will bid aggressively to keep improving the service, especially the stations which have been badly neglected.”