The end for Bankfoot

During January 2009, Perth-based Bankfoot Buses appeared before Scottish Traffic Commissioner Joan Aitken at a public inquiry at which the decision was taken to force the company to cancel its bus services in the Scottish city after complaints had been received from Perth's other bus company, Stagecoach.

Bankfoot Buses used some ex London KxxxSRH Darts, still in Stagecoach corporate livery. Their own colour scheme looked smart enough though.
Allegations had been made - and witnessed by compliance officers - that Bankfoot Buses had been 'deliberately causing ill-will' towards Stagecoach by operating buses once owned by Mr Souter's company, and tailoring its workforce with a similar-style uniform. Furthermore, a forged O Licence had been identified and 'tampering' with city centre bus stops had also been recorded. Ms Aitken duly decided to revoke the company's licence for a period of 3.5 years. 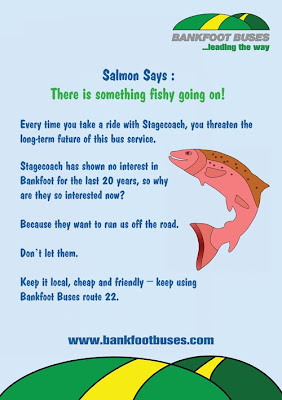 Bankfoot Buses claimed that rather than it be they who went out looking for trouble, it was in fact Stagecoach that wanted to 'run us off the road'
Bankfoot Buses retaliated by referring to the TC's decision as "laughable" and "had a good chuckle" at the section in which Ms Aitken claimed the company had "manipulated public opinion" by providing free services and offering mulled wine over the Christmas period.

They chose to continue to operate their main Service 22 free of charge, for which, of course, they'd need no Operators' Licence, though also prevented them from charging any fares. They did suggest donations be made by passengers who felt that was inclined. Bankfoot Buses also appealed against the decision and a re-hearing took place on 21 August last year. Citing the same grounds for agreeing with Ms Aitken, Deputy Traffic Commissioner Tom Mcartney upheld the original decision to revoke and Bankfoot Buses duly lodged against his decision to the Upper Tribunal (Transport Tribunal) the following month.

One year to the day later, on 22 January 2010, the Upper Tribunal found that Bankfoot Buses "did interfere with service run by Stagecoach, had used a forged Operators' Licence disc, failed to display valid Operators' Licence discs, failed to operate registered services without reasonable excuse and interfered with bus stop arrangements in Perth city centre, to the detriment of road safety, traffic management and public expectations."

Bankfoot Buses' website hasn't been updated since May 2009
This decision, strangely, hasn't appeared on Bankfoot's website; in fact, no further updates have been made since notice was given for the withdrawal of (free) Service 22 from May 2009.