For a few weeks now, Nottingham's newest bus operator YourBus has been operating three tendered Derbsyshire services based around Crich (where the tramway museum can be found). In what was seen as a shock move, YourBus won the contracts to operate Service 140 (Matlock-Alfreton), Service 141 (Matlock-Ripley) and Service 142 (Alfreton-Nether Heage) from Doyles Coaches. 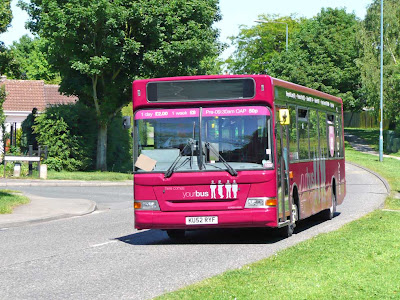 For the majority of the 'naughties', this trio of routes was operated by Stagecoach in Chesterfield, losing out to Doyles following retrenchment to the company's traditional urban heartland and major trunk route operation in north-east Derbyshire. Stagecoach acquired the routes when it purchased Chesterfield Transport in 1995, the latter operated the routes in question for a short period.

With many local authorities choosing to simply award their contracts to the operator who tenders the lowest bid, it's perhaps not shocking that a different operator won the contract from Doyles, (who we're sure placed a very realistic bid of their own) but why would Nottingham-based YourBus tender in the first place? Local management in the form of the Dunn family know Nottingham and its hinterland very well indeed. 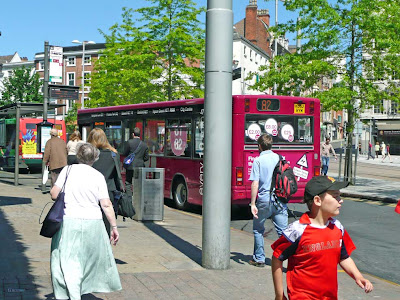 For the requirements of the service, a bus must travel dead from YourBus' Nottingham base to Matlock for 0630 and to Alfreton for 0657. This has to be factored into the price YourBus tender, not to mention how its workforce operating the routes some 20 miles from Nottingham have their legal rest periods. Stagecoach used to send a bus to Crich, where over a period of 3 hours, the drivers of the trio of routes would be relieved and spend their meal break sat on the 'paddy bus', before it was returned to Chesterfield.

Is it a sign that YourBus has ambitions for expansion at any cost? Local authority contracts, while offering a reasonable return provided a realistic tender has been placed, do not offer the potential for operators to get rich quick, unlike a monopoly of services in an urban operation (some would even argue that, nowadays, operators who dominate towns and cities do not make the profits they used to). The new, fledgling urban Nottingham operator, competing against two modes of transport (in fact, NET was firmly in their sights as their main focus for aggression) will have been all too aware of this and probably expected not to see exponential growth. 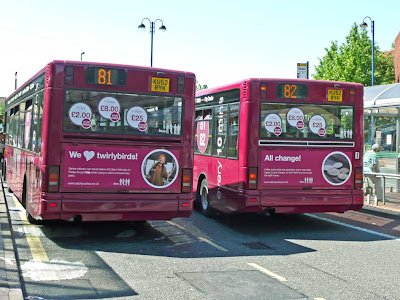 We understand, though, that YourBus' two routes in Nottingham have been regarded as a success and with their first anniversary approaching, what next?

Perhaps the company's expansion into contract services miles away is a sign that other opportunities haven't been found in Nottingham, or it could be that the Dunn family simply know a good deal and bid for whatever they can, provided it returns some form of profit. Who remembers the operational sprawl of Dunn Line a decade ago? They used to operate Service 202 for Derbyshire County Council on summer Sundays and Bank Holidays, which effectively saw the company working Castleton-Buxton buses all day.

We strongly suspect that the Service 140-2 gains are merely the start of things to come and that YourBus will soon no longer be regarded as "that operator who picked a fight with the trams in Nottingham."

In other news, Derbyshire-based Trent Barton has seen off-peak expansion following their acquisition of TM Travel last month. Contracts that TM Travel operated, which were even further from their Halfway base than Matlock is from Nottingham, have seen Trent Barton operate them on behalf of their subsidiary. Trent Barton has also been operating direct Sunday evening journeys between Matlock-Chesterfield on what is Stagecoach's trunk route, Service 17. We understand this is the first time since privatisation that Trent Barton has operated between these two points. 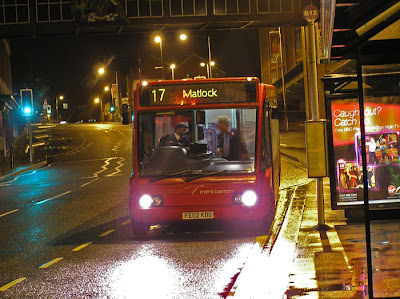 STOP PRESS: Thanks to information received by a blog reader, we can detail a new YourBus route added to their portfolio: Service 36 (Nottingham-Chilwell) from 22 February, running to a 20-minute frequency. Map below: 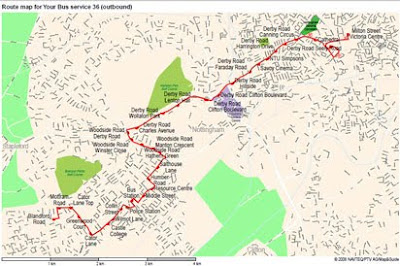 An excellent read, as ever. And thanks for the update. Is it possible, do you think, for the updates to past posts to me made more prominant, say detailed in a new post? They're easy to miss otherwise. Bob.