T&W Metro to be privatised?

There can be little doubt that the rail industry was an easy target for government spending cuts in the pre-Hatfield years, and that now with a far stronger case for continued investment to meet agreed climate change targets, the government has a tricky situation on its hands.

Labour was famous (our should that be infamous?) for coining the phrase 'the third way' and this extended to the part-privatisation of London Underground, with Public Private Partnerships (PPPs) being set up, which would grant concessions to private companies, who would invest millions in their part of the network by renewing ageing track and signalling equipment and upgrading stations, while in the long-term having to hand back the network to the government.

Gordon Brown, while Chancellor of the Exchequer, was the main advocate of the PPP scheme, signing the deals between Metronet, Tube Lines and Transport for London (TfL). The former failed to invest what it had hoped to do and fell into administration, which resulted in the London Mayor at the time - Ken Livinstone - spending millions from TfL's transport budget to effectively buy back the lines and stations Metronet had been awarded.

A similar scheme is being implemented - with less national controversy - in the North East, with the effective privatisation of the Tyne & Wear Metro system over the coming months. In 2008, Nexus, the Tyne & Wear PTE, signed an agreement with the DfT that would see it receive £600 million to upgrade its entire Metro system. Wanting value for money, the preferred bidder was sought and it looks as though the German state railway company DB Reigo will be the victor. 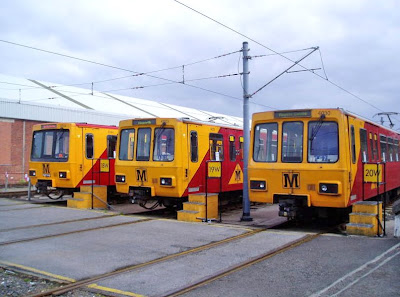 Nexus operate 90 Metrocars, all of which are long-overdue refurbishment. The last time they were attended to was 15 years ago in what was then described as a 'half-life' refurb.
Clearly this has incensed many, not least the RMT union, who - through its irrepressible general secretary Bob Crow - stated: "This is the first major privatisation under Gordon Brown's leadership of the Labour Party. It is a betrayal of the people of the North East who overwhelmingly oppose this plan, and is electoral suicide for Labour, smack-bang in its heartland. This is a disaster for Tyne and Wear which will be felt right across the region. We can expect this essential transport service to be bled dry in the dash for profits by the private company."

The biggest kick in the teeth Labour could have received would have been by cancelling the Metro upgrade altogether to save itself £600 million. Securing government money is never an easy task, and clear signals have been made by the DfT that Nexus is not getting a penny more than £600 million. Nexus currently own, maintain and operate the entire Metro system and had an in-house consortium who expected the be given the contract as a matter of course; certainly this is what the RMT expected. For its part, the in-house team was a frontrunner with DB Reigo, though being pipped-to-the-post last month when its competitor was named preferred bidder.

Nexus will continue to set fares and service levels, an agreed fee will be paid to DB Reigo for its operation of the system. They are understood to receive £15 million from Nexus to oversee the overhaul of the 90 Metrocars - fifteen years after this last took place. 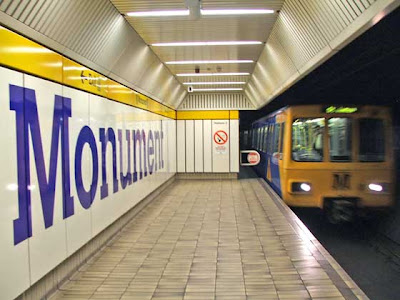 Monument is a busy city centre station that will see considerable investment following the concession being awarded to the German state railway company. Initially, it will see new escalators installed.
£300 million will be spent on Phase 2 of the upgrade, covering the next three years, and will include the rebuilding of Central station; the installation of new escalators at Monument; the modernisation of 11 stations (North Sheilds, Meadow Well, Percy Main, Howdon, Hadrian Road, Wallsend, Walkergate, Chillingham Road, South Gosforth, Ilford Road and West Jesmond); four new lifts will be installed at Heworth and Four Lane Ends; a third of the 90 Metrocars will be refurbished; new barriers and 225 ticket machines will be installed at 13 stations (barriers were removed at the end of the 80s); 30km of track will be renewed, along with four junctions; 60,000m of communication cables will be laid and 34 bridges will be either repaired or strengthened.

LEYTR Comment: Serco operates the Docklands Light Railway (DLR) on behalf of TfL and does so with incredible efficiency. When compared with the Underground network for punctuality, as it so often is, he DLR is always leaps and bound above everything else, and operates in a similar way to that soon to be imposed on DB Reigo for the T&W Metro. The might of TfL's transport provision dwarfs Nexus', but a similar operational framework could see massive benefits.