Not quite what it seems in Slough

During the last series of Top Gear (which, incidentally, returns this Sunday for a new series), the presenting trio managed to elicit a round of applause from their audience in response to a statement given by an obscure councillor working for the Highways Department on Swindon's Conservative-controlled local council. 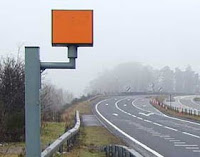 The now seemingly famous Councillor Peter Greenhalgh had stated that the fixed speed cameras in Swindon were a "blatant tax on motorists" and managed to steer the council there to remove them. Not only was this sentiment greeted with much admiration - a rare emotion from Jeremy Clarkson it has to be said - but Cllr Greenhalgh was offered a throne to sit on in the Top Gear studio hangar whenever he pleased.

Richard "Hamster" Hammond then made a plea to motorists in the Swindon are to take particular care over the coming months as other councils were likely to be watching what Swindon had done very closely indeed, and inferred that, if successful, speed cameras could be removed from other council areas.

What was missed, and despite now coming to light hasn't been picked-up by any pro-motoring magazine I've come across, is that while it's true that the fixed Gatso speed cameras in Swindon are in the process of being removed, Wiltshire Constabulary are to equip its traffic officers with hand-held speed guns - something that had hitherto not been actively enforced in Swindon - and will be almost certainly catching more speeding motorists than ever before. 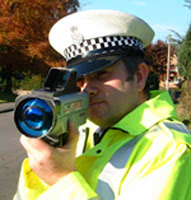 Locally, everyone knows where their fixed Gatso speed cameras are and so - rightly or wrongly - deliberately ensure they drive correctly in their vicinities; now a Police motorcyclist can hide himself neatly behind a load of parked cars, speed gun in hand, and zap unsuspecting speeding motorists.

It's fair to say that equipping traffic officers with mobile speed guns is a lot cheaper than maintaining and repairing fixed speed cameras, and it could also be argued that more people are likely to be caught in this manner, too. Could it be a very clever piece of PR by Swindon council?

North-East Lincolnshire was one of the very few remaining local councils to have absolutely no fixed speed cameras in its area, though this has recently changed with a fixed Gatso speed camera now being in force along the A46 dual carriageway near Laceby.
Posted by LEYTR