If we're all honest, visiting a toilet on board any sort of public transport is usually an arduous task at best. Yesterday I travelled from Oxford to London on Stagecoach's flagship Oxford Tube coach (I'm after one of the special Oxford Tube ties if anyone's able to oblige!) and for much of the journey the toilet was occupied by an Oriental young woman projectile vomiting. Even if I had chosen to make a dash while she temporarily re-took her seat, I'm not sure I'd want to go in there.

Coaches tend to have the most basic chemical toilets on board. They are improving - those offered in National Express' Levante-bodied coaches are a vast improvement on anything offered before. I spoke with NX's Engineering Director last year and he told me how he'd personally been involved with the design of the washroom area on these vehicles.

Trains fair a little better, as do planes. I'm always impressed with the mini judder just after the flush handle/button has been pushed/pressed, which is then followed by an almighty sucking action as, well you can imagine, cleanliness prevails.

Which is why I laughed at a piece in today's Daily Mail, which reported how a chap in France managed to get his arm trapped between the waste flap and bowl of the toilet on the TGV train in which he was travelling: 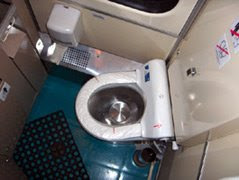 A passenger on a French train had to be rescued by firemen after having his arm sucked down the on-board toilet. The 26-year-old victim was trapped when he tried to fish out his mobile phone, which had fallen into the toilet bowl, and fell foul of the suction system.

The high-speed TGV train had to stop for two hours while firemen cut through the train's pipework. Firemen had to cut through pipework on a TGV train after a man had his arm sucked down the on-board toilet.

The man was carried away by emergency services, with the toilet still attached to his arm. 'He came out on a stretcher, with his hand still jammed in the toilet bowl, which they had to saw clean off,' said Benoit Gigou, a witness to the man's plight.

The shame of it all - especially to be walked to the awaiting ambulance with the bowl still attached! I cannot believe that anyone would even attempt to thrust their arm merrily down the waste pipe, especially after the almighty sucking sound generated immediately before the bowl is emptied!
Posted by LEYTR