Who do you suppose owns this bus stop flag? 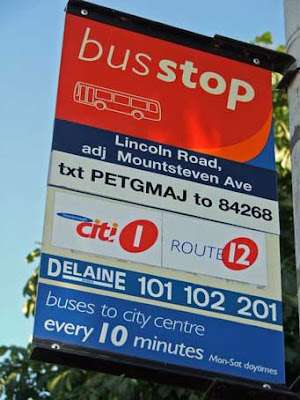 If your answer is Stagecoach then you'd be wrong!

The flag, although displaying the brand image and font of Stagecoach UK Bus, is in fact owned (and paid for) by Peterborough City Council. Back in 2002, Stagecoach East's Peterborough depot made alterations to its aging network of bus services, resulting in wholesale changes. At the same time a partnership was forged with the local unitary authority who purchased all bus stop flags needed so that a kind of uniformity was given to the 'poles of Peterborough' (no pun intended).

Similar flags can be seen throughout the Stagecoach East operating area. Whether or not the respective local authorities in this area have paid for these themselves isn't known to me. Now, of course, Peterborough, along with neighbouring Cambridge depot, form the Cambridgeshire group and, along with recently acquired Cavalier Contracts, have struck a deal with Cambs CC to maintain every bus stop flag in the entire county of Cambridgeshire - all in the design pictured above, and whether or not Stagecoach call at the stop or another operator altogether.

It's certainly the first time I've seen a local authority provide bus stop flags in one operator's style and design. This has rather strange anomalies, too. Take the village of Barnack: it nestles immediately south of the Lincolnshire border, just in Peterborough City Council's area, and the village bus stops are of the Stagecoach design (pictured above); yet this is Delaine Buses' stomping ground; moreover Stagecoach operate no services through that village and haven't done so since the start of 2003.

This does open up the potential for many, many posts on unusual or incorrect bus stop flags. I mentioned last week about the one in Oxford Street, Grimsby, erected in the late-80s that has remained untouched ever since - still baring the GCT emblem (Grimsby-Cleethorpes Transport) and, better still, no bus has called there for over half a decade.

Not too far from Barnack is King's Cliffe, Northants, whose residents take for granted the RoadCar bus stop flags in the village. This is Lincolnshire RoadCar, who stuck their flags there in the early 90s when they tinkered with a Stamford outstation, after winning contracts to provide transport for Northamptonshire County Council. They remain in situ today!
Posted by LEYTR