Double deckers aren't having much good publicity lately with news of a second accident involving a two-storey PCV the day after the Alton crash. On this occasion a Stagecoach in Fife Volvo Olympian collided with the Dunniker Road railway bridge in Kirkcaldy, which carries the East Coast Main Line (ECML). No one was injured in the partial decapitation as the bus was being driven back to the nearby depot out of service. The accompanying photo shows the damage sustained. 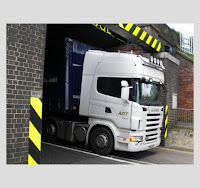 Reports state that it's the fifth time in the last couple of years that the bridge has been struck. Here in the LEYTR area we have the bridge that boasts the dubious title of Most-Hit Rail Bridge in the UK - the bridge carrying the ECML over the A52 Barrowby Road in Grantham town centre. Every time it's struck rail services are frozen until representatives from Network Rail can assess the structure to ensure no weaknesses have become apparent as a result of the collision. Recently South Kesteven district council has painted the bridge (and two others in the town) black with huge fluorescent yellow signs stating LOW BRIDGE but still the strikes occur.
Posted by LEYTR